Why Coronavirus Reparations From China Are Just a Distraction 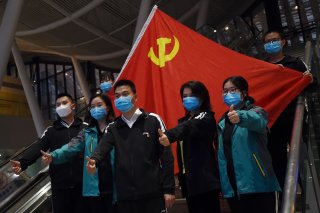 There have been increasing demands for reparations from China for the harm caused by COVID-19. President Donald Trump called for compensation from China for the economic costs of the virus. Some reports suggest US officials are also discussing whether families of victims could sue China. Obiageli Ezekwesili, a former World Bank vice president, has called on China to pay reparations to African countries.

In one case in the US state of Missouri, the attorney general, Eric Schmitt, filed a legal claim in federal court in April seeking cash compensation from China. The civil claim alleges that China responded slowly to the coronavirus outbreak in Wuhan, which led to billions of dollars of damages to the economy. Mississippi announced plans to bring a similar claim. China has dismissed these out of hand as “absurd”.

Reparations have long been a means to remedy wrongdoing in international law. The 1919 Treaty of Versailles after the first world war is a common example, but in the past century reparations have been used for a range of violations of international and domestic law. These include for Iraq’s invasion of Kuwait, payments to Holocaust victims, to indigenous communities who lost their land, and pay outs by churches for institutional abuse.

In the US, longstanding claims by African Americans for reparations for slavery and racism have become more pronounced following the killing of George Floyd. This has been best argued by the writer Ta-Nehisi Coates who explains how historical injustices continue to manifest themselves in everyday racism and structural inequalities. The claim for reparations for African Americans is the claim for victims to be recognised as human beings and to be treated as citizens with equal rights and dignity.

Reparations are now understood to go beyond just compensation or money, and also include restitution of property, rehabilitation, memorials, apologies and institutional reform.

In the case of coronavirus, there is unlikely to be a strong legal basis to claim reparations from China under international law. Despite calls by US politicians for victims to sue China, the chances of claiming reparations in the courts of other countries is generally not allowed under the international legal rules of sovereign state immunity.

And even if there were a legal basis or political reason to do so, reparations could be difficult to implement. Compensation for the financial loss or the deaths of now hundreds of thousands of people would likely put the sum in the trillions of dollars. Some countries have suggested a payment for those who have died from the virus, prioritising healthcare workers, particularly ethnic minorities who have a disproportionately higher death toll. But this will be a matter for domestic governments and courts, rather than international arbitration.

Reparations are often used as a means of making claims about the past. In one way this is a means for those making the claims to lay blame at the feet of those seen as responsible for their suffering. A good example are reparations claims made by Colombian victims against the company Chiquita after it admitted funding paramilitary and guerrilla groups, who killed local civilians, so that it could protect its banana plantations. Some of the legal claims are still ongoing.

But claiming reparations against a particular organisation and not others can also be a cynical way to deflect attention from the responsibility of those making the claim. A good example are the claims by white nationalists that Irish emigrants to America were also slaves, so as to undermine claims for reparations by African Americans for centuries of systemic racism and marginalisation.

In the case of the US, its slow response to the pandemic in light of warnings from its own intelligence services about the risks of the virus and alerts by the World Health Organization, have aggravated the impact of the virus – as have the government’s own mixed messages about the seriousness of COVID-19.

Yet by claiming reparations from China, the US is laying the blame for all the harm that has been caused by coronavirus at China’s door – with some dangerous consequences. Framing blame for the pandemic on China has also seen increasing attacks on Chinese people in the US and other countries, fuelling xenophobia and nationalism.

Reparations only get us so far. They cannot solve all suffering or structural inequalities. They can provide a set of values for claiming accountability in the face of injustices of the past. However, other social movements, protests and cultural shifts such as the Black Lives Matter protests may be a more effective means of social transformation through resistance and the awakening of public consciousness to tackle institutional and social racism as well as health inequalities.

Blaming one country for the virus is a distraction from more fundamental shifts happening around the world, such as increasing right-wing populism, excessive use of draconian powers and the degradation of the environment that threaten to undermine human rights today and for generations to come.

All of humanity is affected. Rather than states turning against each other, we should rethink how we can rebuild, together, in the aftermath of this virus.