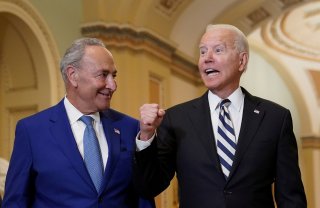 Here's What You Need to Remember: While the Biden administration passed the American Rescue Plan in March with $1,400 checks for most Americans, they seem to lack the appetite for distributing another round of such checks, especially as the pandemic has begun to recede.

The Democrats in the U.S. Senate announced Wednesday that they have reached a deal on a budget framework that will entail spending $3.5 trillion over the next ten years.

“We are very proud of this plan,” Senate Majority Leader Chuck Schumer, D-N.Y., told the press after the announcement, as reported by CNBC. “We know we have a long road to go. We’re going to get this done for the sake of making average Americans’ lives a whole lot better.”

The package, which was produced by the Democrats on the Senate Budget Committee, is meant to pass Congress, including getting through the Senate through the budget reconciliation process, and the Democrats are hoping to pass it before Congress leaves for its August recess.

To pass with the 50/50 Senate, the package will almost certainly need to get every Democratic vote, which would enable Vice President Kamala Harris to break the tie in the Senate. The deal does not mean the bill has the endorsement of all fifty Senate Democrats.

It is not to be confused with the bipartisan infrastructure package, which was agreed to by lawmakers from both parties last month. That is not expected to be taken up until the fall.

The reconciliation bill is “expected to lay the groundwork for hundreds of billions of dollars in new spending for elder care, home care, child care, prekindergarten, paid family and medical leave, housing programs, and other education and safety net programs,” according to The Washington Post.

The proposal for the reconciliation bill also contains money that would expand Medicare to cover dental, hearing and vision healthcare.

The reconciliation bill appears likely to resemble a version of Biden’s proposed American Families Plan, while the bipartisan bill has more in common with Biden’s proposal for an American Jobs Plan, which included more spending on “traditional” infrastructure.

But one thing that the new proposal does not include, even as a Democrats-only bill, is an additional round of stimulus checks. Despite petitions calling for such a thing, the reconciliation package does not include them, likely putting the final nail in the coffin of such checks going out this year.

There has been little appetite for a fourth round of checks, with Biden not including such a proposal either in the proposed American Families Plan, his American Jobs Plan, or his proposed federal budget framework. The White House has also seemed to push back against that idea whenever they have been asked about it.

While the Biden administration passed the American Rescue Plan in March with $1,400 checks for most Americans, they seem to lack the appetite for distributing another round of such checks, especially as the pandemic has begun to recede.