Why Did an American Fighter Jet Attack This Australian Ship in 1968? 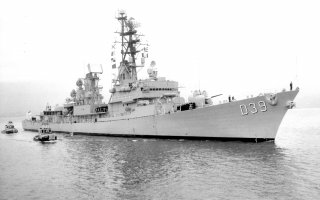 Here's What You Need to Know: The mistaken attack killed three Australian sailors.

Friendly fire casualties were common in the Vietnam War. The unconventional nature of the conflict made for more than the occasional artillery mishap and engagements in dense vegetation often meant combatants had little opportunity to visually identify their targets before firing. As morale deteriorated late in the war, “fragging” incidents became common, with enlisted personnel turning upon their officers. And of course, relations between American and South Vietnamese forces were always strained.

Even in this context, however, one “friendly fire” incident stands out. On June 17, 1968, U.S. fighter jets apparently launched air-to-air missiles that struck a U.S. Navy heavy cruiser and a Royal Australian Navy guided-missile destroyer. How did this happen?

In mid-June 1968, numerous U.S. Navy and allied vessels were operating in the vicinity of Tiger Island, just on the North Vietnamese side of the DMZ. The ships were deployed to interdict the “maritime Ho Chi Minh Trail,” which used small boats to deliver supplies to insurgents in coastal areas, as well as to engage North Vietnamese targets with gunfire.

The USS Boston was a 17,000-ton heavy cruiser, modified from her original World War II configuration to carry a Terrier surface-to-air missile aft. Commissioned in 1944, Boston had served in the final campaigns of the Second World War before entering the reserve fleet. Reactivated for Korea, she was later one of a few vessels to receive a single-end conversion, with the aft turret replaced by the Terrier missile system. Ironically, the guns of USS Boston would prove more lasting than the missiles, which were quickly rendered obsolete by rapid advances in missile technology. Boston was in Vietnam primarily because of what her guns could deliver to Vietnamese shore targets. Boston was accompanied by USS Edson, a 4,000 ton Forest Sherman class destroyer with a heavy gun armament, two small patrol vessels, “swift boats” PCF-12 and PCF-19, and a U.S. Coast Guard cutter were also in the area.

Alongside the U.S. ships served the Australian destroyer HMAS Hobart. Hobart was a 4,600-ton guided-missile destroyer of a modified Charles F. Adams design. Australia had attempted to build its own class of destroyers, but the effort had resulted in over-priced, underperforming ships. Consequently, Canberra made the decision to buy destroyers from the United States, part of a historic shift of alignment from the United Kingdom to the United States. Hobart was primarily designed for air warfare (with a Tartar SAM system) but also carried a 5” gun and various anti-submarine equipment.

On the night of June 16, 1968, unidentified aircraft fired missiles at PCF-12 and PCF-19. Two missiles hit PCF-19, sinking it rapidly. PCF-12 and the Coast Guard cutter responded, pulling survivors out of the water. PCF-12 claimed to identify a pair of North Vietnamese helicopters as the assailants, although such craft had not previously been reported in the area.

Some hours later, jet aircraft approached the allied flotilla. Hobart and Boston evaluated the aircraft as friendly, rendering them completely surprised when missiles struck the ships. The destroyer USS Edson also came under attack but was not hit. Boston, heavily armored by the standards of the day, suffered only minor damage. Hobart, however, was hit by a missile that killed one sailor and wounded two others. The aircraft circled around for a second pass, firing another two missiles, both of which hit the destroyer. Another sailor was killed and six wounded by the second salvo. One of the missiles ended up in an empty magazine devoted to Hobart’s anti-submarine warheads; had it been filled with weapons, the consequences could have been dire. Hobart opened up when it appeared that the aircraft was swinging around for another pass, firing five 5” shells from its forward gun. Analysis later determined that the missiles were AIM-7s, not generally known to be of use in the Vietnamese People’s Air Force.

It was quickly apparent that the attack against the large ships could only have come from U.S. aircraft, and it was soon determined that U.S. Air Force F-4 Phantoms were responsible. How did F-4s mistake U.S. ships for North Vietnamese targets? USS Boston, in particular, was a huge ship by the standards of the Vietnam War. By contrast, the largest ships available to the Vietnamese People’s Navy were small patrol boats, generally less than 100 tons in displacement.

The best explanation for the confused night action is that PCF-12 identified enemy helicopters as the assailants that sank PCF-19. The precise type of helicopter remains unclear, but the Phantoms were summoned to deal with the helicopters. Reportedly, USAF Phantoms of the era carried radars that could not distinguish low-flying helicopters from even large surface vessels. An inquiry determined that the attack on Hobart was definitely a friendly fire incident, but also that the attack on PCF-19 earlier in the evening was the result of friendly fire. However, USAF pilots in Vietnam faced significant restrictions against firing on targets that could not be visually identified, making it curious that the Phantoms let loose against the purported helicopters. For what it’s worth, the case has become famous among UFO enthusiasts, who suggested that the F-4s were targeting UFOs when they struck the Australian ship.

Some lessons; even relatively small weapons (such as an AIM-7) can inflict significant damage on modern warships. While Boston was armored as a World War II heavy cruiser and thus was unlikely to suffer any real damage, the missiles that hit Hobart inflicted casualties and could have done serious damage under the right (or wrong) circumstances. The death of three Australian sailors was tragic, but an unlucky hit could have resulted in the loss of the ship.

Second, simple courtesy should demand that pilots tasked to missions over water should be trained to identify the difference between an American heavy cruiser and a North Vietnamese patrol boat (or helicopter for that matter). At the very least, pilots operating over water in the same area as friendly surface vessels should have had a sense of the danger implicit in launching missiles without clear targets. The Vietnam War was riven with inter-service conflict and inappropriate joint training, although the results weren’t always as dramatic as a missile attack on a cruiser.

Modern technology makes incidents like this far less likely, with improved friend or foe recognition systems and radars that are better at discriminating between surface and air targets. At the same time, the increased lethality of modern weapons threatens to make the impact of friendly fire incidents considerably more devastating.