Why Did the Indian Army Decide to Buy Sig Sauer's 716 Rifle? 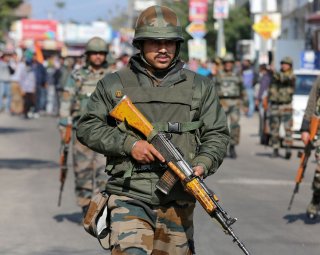 Key point: India has a large army to supply with weapons. Here's why it makes some of the important and delicate arms purchases it does.

In February 2019, the Indian Army announced the purchase of SIG716G2 7.62x51mm battle rifles. The SIG716 is meant to complement their purchase of AK-103 rifles from Russia and Caracal CAR 816 carbines. This will mean that the Indian Army will field service rifles in three different calibers in the near future: 7.62x51 in the Sig, 7.62x39 in the AK, and 5.56x45 in the Caracal.

This first appeared in July 2019 and is being republished due to reader's interest.

But in the tender for the Indian Army contract, the Sig was mentioned to have beat out two other 7.62x51mm battle rifles for the final purchase: The Caracal CAR817 and an Israeli rifle from IWI, which either could have been the Galil ACE 7.62 or Tavor 7.

So how does the Sig rifle stack up to these competitors? Which factors could have lead to its eventual purchase by the Indian military?

In layout, the SIG716G2 is practically identical to the Caracal CAR817. Both rifles are AR-pattern 7.62x51mm battle rifles that utilize a short-stroke tappet gas piston mounted above the barrel. There are some minor differences between the two rifles in internal layout, piston design, and ergonomic features, but the primary functional difference is the setup of the gas block.

On the CAR817, the gas block is railed to mount a forward iron sight, presumably to better hold zero as the ironsight is mounted directly onto the barrel. However, on the CAR 817, this means that the rail terminates at the gas block, preventing the mounting of lights and lasers far forward on the rifle, where many users prefer to place them.

In contrast, the SIG716G2 has a low profile gas block that fits under the rail that allows the rail to extend further forward. Small cuts in the rail give space for a tool to adjust the gas block to different gas settings. The SIG’s longer rail and low profile gas block appear to be the most popular barrel and rail configuration on rifles nowadays, being used on U.S. Army SOF’s new URG-I and various other popular Colt Canada, SIG, and H&K rifles.

The SIG716G2’s gas block is also additionally tunable, having four gas positions including an “off” setting for launching rifle grenades, compared to the CAR817’s two gas positions, which don’t include a full off.

The gas cutoff present on the SIG716G2 could have been the deciding factor in the Indian military’s decision. One of the rifles that the SIG716G2 might replace is the INSAS, which also has a gas cutoff for the purpose of launching rifle grenades.

From the Israeli rifles, the Galil ACE 7.62 lacks a gas cutoff while the Tavor 7 has one. But the Tavor 7 doesn’t appear to support an extended barrel with gas rings that launching rifle grenades would probably require. The Indian military already makes limited use of the Tavor rifles in 5.56, but existing examples have only been seen with underbarrel grenade launchers, not rifle grenades.

However, regardless of technical features, the selection of Emirati, American, and Russian rifles as the new service rifles of the Indian military could be a political move, balancing commitments between the respective nations. As such, Sig Sauer’s real competitors might not have been the Caracal or IWI rifles, but rather other American battle rifles.

Charlie Gao studied political and computer science at Grinnell College and is a frequent commentator on defense and national security issues. This first appeared in July 2019 and is being republished due to reader's interest.