Why Did Iran Retrofit a Geriatric Helicopter for Inflight Refueling? 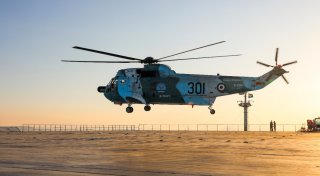 Here's What You Need to Remember: The addition of a refueling probe also raised a fascinating question. Five years later, Iran still has not admitted to possessing a tanker plane that can fly slow enough to refuel the RH-53D. Does the appearance of a probe-equipped helicopter indicate that Tehran is working on a new fleet of aerial tankers?