Why Did a White Professor Lie and Claim to be Black? 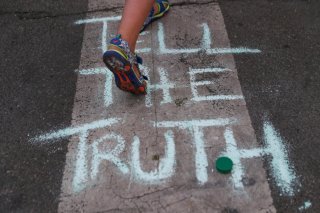 After Jessica Anne Krug posted an apologia for passing as Black, the public furor was immediate. Krug was born and reared as a white Jewish female in the suburbs of Kansas City.

On the very morning that Krug’s confessional appeared, the confidante she called for solace publicly denounced her. Her university relieved her of teaching duties and opened an investigation. The public called her mentally unstable. Her colleagues in the history department at George Washington University openly admonished her to give up tenure and go.

Karma Feinstein Cohen — another white American Jewish woman — urged Krug to come to Israel, where Krug could learn to develop who she “authentically” is “by developing [her] personal Jewish identity.” Reserving comment on the prudence of Cohen’s offer, we might note that besides asking Krug to accept personal responsibility, Cohen is asking Krug to do some personal learning and growth about identity.

As a Black man and a scholar of neo-passing — acts and stories of passing that occur after legalized segregation, especially in our contemporary context — I believe we could benefit from the same. As a query, we might ask: What can we learn from this painful tale?

The persistence of passing

On July 17, 1952, the African American weekly Jet Magazine featured the article “Why ‘Passing’ Is Passing Out.” The article reported that increased economic opportunities for Blacks, the nascent civil rights movement and growing racial esteem made passing less attractive and less necessary for Blacks.

Of course, Jet’s prediction was more hope than fact — as English professor Mollie Godfrey and I write in the introduction to our book, Neo-Passing: Performing Identity After Jim Crow — because passing has proliferated post-civil rights. We note some 21st-century examples that brought us to our study: a white author uses an Asian pen name; heterosexuals live “out” as gay and, irony of ironies, whites try to pass as Black.

While there is some recorded history of whites passing as Black, as historian Daniel Sharfstein details in the New York Times, and while there are fictional accounts, as analyzed by English professor Baz Dresinger in Near Black: White-to-Black Passing in American Culture, this type of passing is not well-known or understood.

We may point to other modern examples of white people passing for Black, such as Rachel Dolezal, but we do not have clear theories about why they do it. The need to escape racism and social ills does not appear to be an exigency for white-to-Black passing as it does for Black-to-white. Nor is the more mundane narrative logic presented in the 1986 movie Soul Man, where a white male college graduate passes for Black in order to get into law school through affirmative action policies.

Read more: Rachel Dolezal: why ignoring the painful past of "passing" is indefensible

So why does passing persist? And why are white people passing for Black?

In 1929, novelist Nella Larsen predicted with the conclusion of her first novel Passing that the controversy of racial passing would plague us for hundreds of years. Claire Kendry, one of the novel’s Black-to-white passing protagonists, leaps through a third-floor apartment window after her white husband busts into a Black party, demanding to know if Claire is a “Damned, dirty n——.” The party-goers rush downstairs, but Claire’s body is nowhere to be found. Irene Redfield, Claire’s friend and the other central character, faints.

The novel ends, presenting Irene’s dilemma as our own: “Centuries after, she heard the strange man saying: Death by misadventure, I’m inclined to believe. Let’s go up and have another look at that window.” The words “centuries after” indicate that we are doomed to racial anxiety through recurring questions and investigations about racial passing.

We do not yet understand, refuse to understand or can’t reconcile the current scientific understanding of race with our social, political and economic experiences with it. Why do we allow race as a category of identity to endure, despite the fact that we now know it is a biological fiction, a social construction? And why do we recommit ourselves to the illogics of race — that people can only be one race or be disallowed from performing another race — in the midst of admittedly unsettling tales like Krug’s?

Read more: 'I wanna be white!' Can we change race?

I believe there is much more for us gain by discussing race, identity performance and passing in the context of Krug’s recent outing. Too many of my colleagues and the public believe the problem is solved because Krug has been unfriended, silenced and punished. I wonder how much there is to learn and how much more we might lose by not lending a heart, or at least an ear, to the details of Krug’s story.