Why Do Iranian Commandos Use American M16 Rifles? 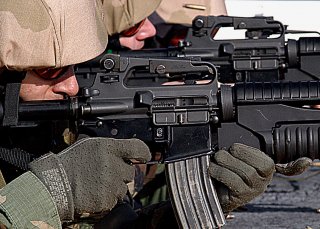 Key point: Norinco has been cloning American guns for decades—and selling them to unfriendly countries.

The M16 and Derivatives (Norinco CQ)

Norinco has been making clones of the M16 since the 1980s, if not earlier. The first models, simply called Norinco CQ, were clones of the M16A1 with a different pistol grip, handguards and finish. These rifles were sold to special units in foreign governments unfriendly to the United States, like Iran, who wanted a rifle with the ergonomic layout of the M16. As the M16 design evolved, Norinco kept pace. Norinco came out with the CQ-A, a clone of the M4, as the U.S. Army started fielding more M4 Carbines in Iraq in the 2000s. This rifle was also sold to other governments as a low-cost alternative to American rifles. The CQs has even seen limited use in China, where footage showed special units of the People’s Armed Police using the CQ-As. It also was adapted to sell on civilian markets, and remains one of the cheapest AR-15s one can buy in Canada.

Today’s Norinco M14 clones are known for being some of the cheapest semi-auto full caliber rifles a hunter can buy in Canada. The original purpose of Norinco’s M14 clones, however, was far more sinister. In the 1970s, China reverse-engineered M14s captured in Vietnam, produced them with American markings (along with 7.62x51mm ammunition with British markings) and hoped to clandestinely arm Communist Filipino rebels. Attempts to deliver these rifles failed twice, so by-and-large they remained in China. Parts from the rifles were later sold in the United States as parts kits to build rifles on American receivers. The British marked ammo also ended up being sold on the American commercial market. Norinco presumably kept the tooling, and later began producing M14S (this time in semi-automatic only) for the civilian market. Chinese M14 clones were imported into the United States from 1988 to 1994, and continue to be sold around the world. In the brief period when they were imported into the United States, representatives from Norinco met with American gunsmiths to improve the fit and manufacturing of the Chinese rifles to be more in line with the original USGI M14s. In Canada, they’re known for having around the same level reliability as the more expensive Springfield Armory M1A, while being less than half the cost. However, the finish on M305s is known for being rough. Recently, the M305 design has been adapted to chamber 7.62x39mm and feed from AK magazines. The new gun is called the M305A, and can be seen as a direct competitor to Ruger’s Mini-30 design.

While the United States also gets cheap Asian M1911s from Armscor in the Philippines (branded as Rock Island Armory), Norinco was the first to clone the 1911. Norinco started producing M1911 clones for commercial export around the 1980s, when the North American and European gun markets started opening up to China. Norinco 1911s have a reputation as being some of the most reliable pistols in their price tier (lower than $500!), albeit with terrible finishes.

Winchester discontinued the venerable M1897 shotgun in the 1950s in favor of newer designs. Norinco saw this as a potential opening in the market and started to produce clones in various configurations for the international hobbyist market. Since the 1897 has a storied history in the world wars and in cowboy cinema, the demand for the guns in reenactments and in cowboy action shooting matches is rather high. Norinco stepped in with their 1897 clone (although they are now branded as Interstate Arms) to fill this void, and by all accounts have delivered a decent product. Similar to Norinco’s M14s, American gunsmiths have provided assistance to Norinco in getting the clones true to the original.

Norinco doesn’t just clone military arms. They also saw the void created by the end of production of the Colt Woodsman (of Ernest Hemingway fame) in 1977, and stepped in with the Norinco M-93 “Sportsman.” The M-93 Sportsman even comes in a retro-styled box, complete with American eagle and shield that’s meant to evoke the era of the Woodsman.

While every gun on this list is a clone of an American firearm, Norinco clones firearms from all over the world. They’ve produced copies of pretty much every major design in the last half decade, from the east and west, from the CZ-75 to the MP5. Due to China’s prominent position in the World Trade Organization—and the fact that Norinco is a state-run corporation—countries are reluctant to bring up copyright infringement by the company. One thing appears to be consistent about Norinco’s cloned guns: they work, but the fit and finish are not as good as the originals.