Why Does China Pay its Military Generals So Little? 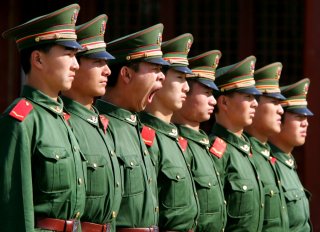 Some members of the Chinese military recently saw a significant pay increase, but even after the raise, they still make far less than their American military peers. In fact, America’s junior enlisted troops tend to make around the same as China’s senior-most leaders.

The Chinese military’s rapid expansion and modernization efforts in recent years are certainly expensive, but somehow, China claims to devote less than a third of America’s defense budget to their own military endeavors. In 2020, China’s Defense budget was a claimed 1.268 trillion yuan, or about $196 billion. America’s, on the other hand, was a hearty $778 billion.

Despite this significant disparity in spending, over the past two decades or so, China has managed to field the largest naval force on the high seas, maintain the largest standing army on the planet, close the gap in stealth aircraft technology, and field hypersonic weapons America has yet to match.

So what gives? How has China managed to match and even surpass America’s military capabilities in some realms while keeping its defense spending at less than America allocates each year to interest on federal debt alone? The truth is, it takes a combination of creative bookkeeping, outright dishonesty, and some pretty serious cut corners in the personnel department.

The most important difference between China’s People’s Liberation Army (China’s military) and America’s Defense apparatus, however, is in the breadth of global obligations each force is on the hook for. America’s military serves as a stabilizing presence the world over, with ships, aircraft, and troops operating in countless environments in support of a network of allied nations. China’s military, on the other hand, has a more regional focus, with the breadth of the nation’s military might concentrated in the Pacific, and in particular, the South China Sea.

You can read more about the other ways China hides defense spending in our full feature on the subject, here.

China’s defense budgets benefit from a lower standard and cost of living among its troops. While you won’t find readily available charts of Chinese military salaries by pay grade like you will with American troops, there are some publicly available figures we can use for comparison.

In January of 2021, the Chinese government announced that some members of the People’s Liberation Army (PLA) will receive a 40% increase in their pay before the year’s end. As a means of showing how significant that is, Chinese media outlets quoted a colonel who requested anonymity.

One Chinese yuan is worth approximately 16 cents in American currency. That means a colonel in China’s People’s Liberation Army makes around $3,105 per month, or about $37,260 per year. In another report penned by Dr. Marcus Clay at China Aerospace Studies Institute, he explained how the Chinese equivalent of a Brigadier General in the U.S. Army makes under $42,000 per year.

For context, American service members receive both basic pay and entitlements in various forms, some of which are based on dependent status, location, and type of duty. A married Marine Private First Class (E-2) with less than 2 years of service stationed aboard Camp Lejeune, North Carolina will take home $2,000.70 in basic pay, $386.50 for Basic Allowance for Subsistence, and $1,263.00 as their Basic Allowance for Housing. Combined, that comes to $3,650.20 per month, or about $43,800 per year.

That means a brand new Marine with a spouse, stationed aboard one of the nation’s largest military installations, makes more money per year than a General in the Chinese military.

This also doesn’t take into account other personnel costs, such as veterans’ benefits. To date, the Chinese government has no veterans administration or similar organization to offer such benefits, though retired service members do receive pensions.