Why Does Russia Use an Old Soviet-Era Tank Model as the Backbone of Its Army? 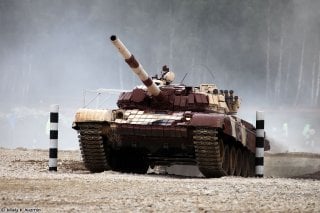 Here's What You Need to Remember: What's notable about the T-72 is how it has been upgraded over the years, as well as its numerous variants. While the T-14 Armata is an intriguing and sophisticated next-generation tank, it seems unlikely that it will be mass-produced enough to become the primary Russian main battle tank any time soon.

There are several thousands T-72s in use around the world. Not surprisingly, the biggest user is still Russia, with about 2,500 in active service and another 8,000 in reserve. As of September 2016, about a thousand T-72s have been upgraded into B3 models, according to a Russian defense site.