Why Does Social Distancing Have a Protest-Sized Hole In It? 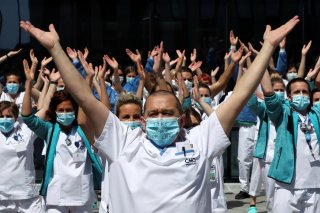 As such, it’s catastrophically destructive to the goals of public health to support participation in the mass protests following the killing of George Floyd.

Supporting the protests, or the message of the protests, is a personal decision, which every individual must make for himself or herself, but if the COVID-19 pandemic continues apace, the mitigation efforts remain as relevant now as they did before people took to the streets by the thousands.

Inconsistent responses based on the content of one protest versus another only shakes the public trust that is critical in time of pandemic.

To make a public stand on a matter, staked upon the expertise of medicine and public health, is to tie that expertise to ideological movements rather than professional knowledge.

That’s to say nothing of the rioting and the looting. If social determinants of health are a factor in public health, it’s plainly obvious that burning down the community and smashing its windows will lift no one out of poverty and only make it harder for that community to prosper.

And it’s not only the economy that suffers. When rioting forces the suspension of public transportation and the closure of some pharmacies, who will be able to get their prescriptions filled? Certainly not the impoverished.

But never mind that.

Earlier this month, an open letter that was “signed by 1,288 public health professionals, infectious-diseases professionals, and community stakeholders” voiced support for “demonstrations against systemic injustice occurring during the COVID-19 pandemic.”

On its face, it’s reasonable—laudable even—to protest injustice and racism, but the letter quickly pivots to blaming health disparities on “long-standing systems of oppression and bias” that are “yet another lethal manifestation of white supremacy.”

That is the language of progressive sociology, not of medicine.

It seems less than certain that medicine necessarily manifests as white supremacy, considering that whites make up 76.5% of the population but only 56.2% of active physicians.

It is possible, likely even, that the remnants of America’s explicitly racist system in the past persist to this day, and our society should continue to fight racism wherever it is found, but the solution for racism cannot be measured in milligrams or formulated into tablets or pills.

While there’s no medical intervention for racism, there is clinical guidance on preventing disease transmission. Washing hands, wearing masks, and physical distancing are—or were—important measures to limit the spread of COVID-19.

It would be easier to take these guidelines seriously if health care workers treated all protests with the same sensitivity. That is to say, we should be taking these measures seriously, and we need to be clear and consistent about their implementation and use.

Instead, numerous grim-faced nurses, doctors, and other health care providers stood cross-armed in opposition to Americans protesting the lockdowns that prevented them from going to work. That was followed soon thereafter by health care workers applauding protesters marching shoulder-to-shoulder in New York City.

The open letter encourages marchers, “to the extent possible,” to follow “public health best practices,” further explaining that they “do not condemn these gatherings as risky for COVID-19 transmission.”

Protests against stay-at-home orders, however, “not only oppose public health interventions, but are also rooted in white nationalism … .”

At no point in medical training are future doctors taught to identify which protest is an infection risk and which is not. A protest, a march, a rally, or large gathering of any kind all present their own public health risks in times of pandemic, regardless of the speech therein.

By choosing which protest is “right” and “just,” and which protest is traitorous and infectious, these health personnel are tying public health interventions to their ideology, which will make it that much more difficult, if not impossible, to obtain a broad, nonpartisan consensus of the public to heed public health measures.

Americans were scolded, chastised, and even arrested for trying to earn a living. Numerous other businesses complied with the rules and are now shuttered for good.

Strict social distancing rules prevented Americans from visiting their hospitalized loved ones and forced them apart as family members lay dying. And when those family members died, their funerals were to be limited to 10 mourners or fewer.

Those restrictions were generally accepted as harsh—in some cases, unbearably painful—measures that would help public health efforts and benefit society as a whole. Those who didn’t comply were labeled traitors to the front-line health care workers and first responders in the COVID-19 response.

But when we see white coats applauding thousands of marchers in the streets and public funeral services attended by hundreds of public figures, all while we’re told to starve with our families or to die alone, who is betraying whom?

Did you, the 1,288 signatories to this letter, the governors and mayors, the public health experts, and doctors and nurses, ever mean a single word you said?

Some of us have been sincere from the start. Some of us asked Americans in earnest to make the most dreadful sacrifices to stem the pandemic spread. Some of us wanted to place more trust in all Americans to assess their own risks, not only in our ideological compatriots.

Now, all of us, when asking the public for their cooperation, will be met not with understanding and acceptance but with mistrust.

This article by Kevin Pham first appeared in The Daily Signal on June 15, 2020.