Why Doesn’t Russia Talk About Its New S-500 Missile System? 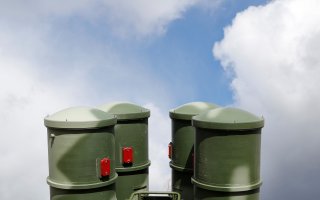 Here's What You Need to Know: Russia could fear that releasing the S-500 would poach on the massive export success of the S-400.

The much-vaunted next generation of Russian missile defense, the S-500 boasts a host of best-in-class performance features. The Triumfator is purportedly able to engage anti-ballistic missiles at six hundred kilometers, an improvement of two hundred km over the already-formidable S-400. The S-500’s range is matched by its no less impressive ability to track and intercept up to ten missile warheads flying at a speed of over 4 miles a second, as previously outlined by a National Interest report citing Russian state news.

Further compounding the problem, Russia will want to proliferate the S-500 among their own armed forces before offering it to foreign buyers. Concrete S-500 export plans remain a distant blimp on the horizon. The Kremlin therefore risks not only jeopardizing ongoing S-400 deals, but doing so with no immediate substitute to offer. By this line of reasoning, The Kremlin shot itself in the foot by revealing the S-500 too early, and is now stalling until the S-400 reaches the end of its market cycle.