Why Doesn't the Army Have "Iron Man" Suits Yet? 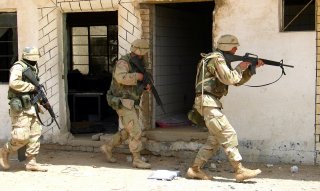 Here's What You Need To Remember: The Army has worked on this problem before, and some of the innovations from its previous iterations - TALOS, for instance - ended up useful in other areas. But the mechanical body armor of Tony Stark remains a pipe dream.

Kris Osborn is defense editor for the National Interest. Osborn previously served at the Pentagon as a Highly Qualified Expert with the Office of the Assistant Secretary of the Army—Acquisition, Logistics & Technology. Osborn has also worked as an anchor and on-air military specialist at national TV networks. He has appeared as a guest military expert on Fox News, MSNBC, The Military Channel, and The History Channel. He also has a Masters Degree in Comparative Literature from Columbia University. This article first appeared last month.