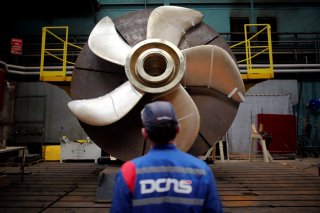 In Adelaide’s The Advertiser newspaper on 7 March, former defence minister Christopher Pyne said, ‘Then there is the nonsensical argument that the Attack Class submarines are no good because they aren’t nuclear. Almost all of these arguments are driven by people who either know nothing at all about submarines and defence or have outdated information that is no longer relevant.’ Pyne must therefore believe that Australia’s current and recent submarine commanding officers know nothing about submarines.

The 2016 defence white paper called for Australia’s future submarines to be ‘regionally superior’. As a former commander of the submarine force, I don’t know any submarine commanding officer over the past 30 years who has any doubt that, overall, nuclear-powered submarines are superior to diesel submarines of similar vintage. Australia’s new Attack-class submarines will probably be superior to most diesel submarines in our region, but they won’t be superior to China’s nuclear-powered submarines entering service in the 2040s and beyond. China’s navy is numerically larger than the US Indo-Pacific fleet now and is forecast to be more powerful than the American fleet by 2035. Australia’s 12th Attack-class submarine won’t enter service until around 2054 and will be in service until about 2080.

Pyne went on to say, ‘Australia does not have a nuclear industry. One cannot be created overnight.’ Pyne might have the cart before the horse. The Americans had their first nuclear-powered submarine in service before their first nuclear power station. The nuclear power station program in the US had been languishing until Captain, later Admiral, Hymen G. Rickover was appointed to head the nuclear reactor development for both naval and civil applications. In the early years, it was trained nuclear submariners leaving navy service and going into the commercial power sector that allowed that industry to grow rapidly.

Notwithstanding that reactors and fuel can be purchased from other countries (the OPAL reactor at Lucas Heights is from Argentina), why doesn’t Australia have a larger and more diverse nuclear industry? Of the top 20 economies (Australia is 13th), 17 have nuclear power. Australia, Italy and Saudi Arabia are the three exceptions. Italy imports 16% of its electricity from adjacent countries, more than half from France where it is produced from nuclear power. Saudi Arabia is acquiring nuclear power. And, as various countries commit to achieving net-zero carbon emissions by 2050, it’s noteworthy that no major economy intends doing so without nuclear power in the mix.

At the time when replacements for Australia’s Oberon-class submarines were being developed in the 1980s, it’s almost certain that neither the US nor UK would have sold nuclear submarines to Australia. With the Cold War at its peak, their focus was on the Soviet Union and the possibility of maritime warfare in the North Atlantic. France was just starting to develop its first nuclear-powered attack submarines. But what about when it came time to explore options to replace the Collins-class submarines?

The 2009 defence white paper announced that the Collins class would be replaced and Australia’s submarine force would be expanded to 12 boats. The defence minister at the time, Labor’s Joel Fitzgibbon, directed the department that, in developing options, it was not to bring forward any nuclear proposal. Three years later, when he was no longer defence minister, Fitzgibbon admitted it was a mistake ruling out a nuclear option; however, neither of his successors altered the ‘no nuclear’ guidance to the department. Consequently, when the Coalition government came to power in 2013, only conventional options had been developed.

Submarines could lead to a broad nuclear industry in Australia. This possibility will be the subject of a seminar to be held at ASPI on Thursday 15 July, jointly hosted by the Submarine Institute of Australia and UNSW Canberra. More information is available here.

Denis Mole served in the Royal Australian Navy for more than 35 years, commanding submarines and attaining the rank of commodore. He has recently retired from the commercial marine and defence support sector.