Why Doesn't the Government Default? 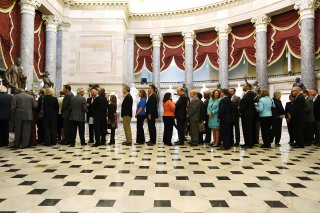 Key point: The Government is not going to default.

If there’s one thing we know about the looming debt limit crunch and the warnings about the dire consequences of default, it’s this: The government is not going to default.

The recurring brinksmanship over the debt limit and the partisan refusal to get Republican fingerprints on the increase don’t say much for our political class. But the U.S. Treasury isn’t full of stupid people, and they’ve been through this drill before. Back in July 2011, when the debt ceiling of $14.3 trillion was about to be reached, the Washington Post reported:

The Treasury has already decided to save enough cash to cover $29 billion in interest to bondholders, a bill that comes due Aug. 15, according to people familiar with the matter.

You can bet they’re making similar plans today. The difference is that 10 years later the debt ceiling is $28.4 trillion, just about doubled, and we’re about to bump into it again.

Back in that summer of discontent I talked to a journalist who was very concerned about the “dysfunction” in Washington. So am I. But I told her then what’s still true today: that the real problem is not the dysfunctional process that’s getting all the headlines, but the dysfunctional substance of governance. Congress and the president will work out the debt ceiling issue, probably just in the nick of time. The real dysfunction is a federal budget that doubled in 10 years, unprecedented deficits as far as the eye can see, and a national debt (more accurately, gross federal debt) yet again bursting through its statutory limit of $28.4 trillion and soaring past 120 percent of GDP, a level previously reached only during World War II.

We’ve become so used to these unfathomable levels of deficits and debt—and to the once‐​rare concept of trillions of dollars—that we forget how new all this debt is. In 1981, after 190 years of federal spending, the national debt was “only” $1 trillion. Now, just 40 years later, it’s more than $28 trillion. Traditionally, the national debt as a percentage of GDP rose during major wars and the Great Depression. But there’s been no major war or depression in the past 40 years; we’ve just run up another $27 trillion more in spending than the country was willing to pay for. That’s why our debt as a percentage of GDP is now higher even than during World War II. Here’s a graphic representation of the real dysfunction in Washington:

And the Congressional Budget Office tells us it’s going to get worse, much worse. See the following chart on page 2 of the CBO’s March 2021 Budget Outlook. The Obama‐​Trump spending pushed “debt held by the public” to levels not seen since World War II. Pandemic spending pushed the debt up to peak WWII levels. But it’s entitlement spending that will take the debt far beyond even today’s level. This is not a sustainable course.

Where did all this debt come from? Obviously, it came from the rapid increase in federal spending over the past several administrations:

Presidents George W. Bush, Barack Obama, Donald Trump, and Joe Biden have all spent money like they had a bottomless pit of it. And the easiest way to spend government money is not to ask the taxpayers to pay for all of it. We may pay in the form of crowded‐​out investment and other private economic activity and thus in reduced economic growth, but no president has proposed to actually raise taxes to match his spending increases.

Republicans and Democrats alike should be able to find wasteful, extravagant, and unnecessary programs to cut back or eliminate. They can find plenty of ideas here.

The debt limit doesn’t seem to limit the debt. So what’s the point of it? Well, at least it gives the political class a periodic reminder that they are piling trillions of dollars of debt on their children. And it focuses Washington’s mind on the spending‐​and‐​debt problem for a moment. If the Republicans who helped Mr. Trump add $7.8 trillion to the national debt in just four years really want to reclaim their reputation for fiscal conservatism, they could make a practical offer: support for raising the debt limit in return for spending reform. Jeb Hensarling, who served for six years as chairman of the House Financial Services Committee, has some suggestions:

I have another idea: tell Speaker Pelosi and Majority Leader Schumer that Republicans will vote for an increase in the debt ceiling in return for Democrats dropping the somewhere-between-$3.5 trillion-and-$5.5 trillion‐​dollar spending bill.

Seriously, we’ve got the highest national debt in history, at more than 120 percent of GDP. Federal spending has reached levels even fiscal doomsayers didn’t predict. The federal government has spent some $6 trillion responding to Covid. Whether or not that spending was necessary in an emergency, any budgeter knows that when you have large unanticipated expenses, you cut back somewhere else. You don’t say “if we can afford $6 trillion for Covid, of course we can afford another $6 trillion in new programs and transfer payments.”

If the brinksmanship that has once again sent the establishment into dire warnings finally results in some constraint on out‐​of‐​control spending, then it will have been well worth all the hand‐​wringing. But it’s important to be clear: the serious dysfunction in Washington is not the occasional debt ceiling kabuki, it’s a political process that produces ever more spending, deficits, and debt.