Why Donald Trump's Unemployment Executive Order Is a Huge Mistake 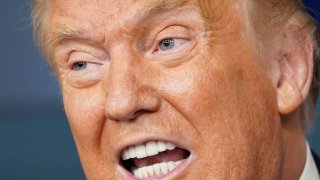 President Donald Trump took action five days ago to provide some coronavirus relief for Americans, saying he wasn’t going to wait for Congress. He signed one executive order and three executive memoranda addressing some of the issues.

Policy experts will debate the merits of the actions, but one primary question is whether the president had authority to take these actions at all.

The answer in the case of one memorandum from the president last week, to provide unemployment benefits, is that the action is troublesome in two ways, which we will explain below.

The Constitution vests executive power in a single president. To exercise this power, every president (except William Henry Harrison, who served for only 34 days) has used “executive actions,” which include executive orders and executive memoranda that direct agencies how to interpret and implement the law.

Such executive actions are legally binding, if they are properly grounded in authority granted to the president by the Constitution or by Congress and don’t attempt to exercise legislative, rather than executive, power.

Some background: Trump signed the Coronavirus Aid, Relief, and Economic Security Act into law March 27. Several categories of assistance provided to individuals under the law, called the CARES Act, have expired or soon will. Congress has yet to take action to renew this assistance as the pandemic continues.

Now, as for Trump’s troublesome Aug. 8 memorandum on unemployment benefits: The extra $600 weekly benefit provided in the CARES Act to supplement state unemployment payments expired Aug. 1. Although Congress is still talking about what to do, Trump says he is stepping into the breach to keep unemployment assistance flowing.

However, Trump can’t actually make the benefit that Congress provided continue. Only Congress can do that. Instead, Trump wants to do basically the same thing using two existing pots of money, the Disaster Relief Fund at the Department of Homeland Security and the Coronavirus Relief Fund created by the CARES Act.

States may apply for a grant from the Disaster Relief Fund, which is administered by the Federal Emergency Management Agency, and use the money for various purposes, including “disaster unemployment assistance.”

Trump’s executive action conflicts with both conditions. It defines as eligible recipients those who actually do receive unemployment compensation and, beyond that, allows this assistance even for the “partially unemployed,” a term the memorandum doesn’t define.

Here’s how the Trump memorandum gets around this conflict: In addition to “disaster unemployment assistance,” states may use Disaster Relief Fund grants for “other necessary expenses or serious needs resulting from the disaster.”

Although the wording is necessarily vague, common sense says that this catch-all category is for disaster-related expenses that don’t fit into the other categories. The memorandum turns unemployment benefits that wouldn’t qualify for a grant into money for “other necessary expenses” that do qualify, simply by relabeling the benefits as “lost wages assistance.”

It shouldn’t be this easy to make a grant program work in a way that is opposite to how Congress designed it. In his memorandum, Trump says he is taking these steps because Congress had yet to decide what to do about the lapsed unemployment benefits of the CARES Act.

This particular memorandum has another problem. The Disaster Relief Fund requires states to pay 25% of the cost of disaster relief. The memorandum, however, creates a way for states to shift their share back to the federal government by allowing them to use the federal assistance they receive from the Coronavirus Relief Fund.

To be fair, the memorandum doesn’t create constitutional problems like those we saw under the previous administration.

Since states must request a grant and agree to pay the 25% share, this arrangement doesn’t constitute the kind of federal government “coercion” that the Supreme Court found unconstitutional in NFIB v. Sebelius. In that case, the federal government threatened to terminate Medicaid funds that states already were receiving if states didn’t agree, at significant additional cost to them, to expand the Medicaid program.

Still, Trump and many others rightly criticized Obama for putting political objectives ahead of essential processes of government, such as the separation of powers. Doing so promotes the notion that the political ends somehow justify the constitutional means, that it really doesn’t matter which branch gets the job done.

Even those who believe that the Trump memorandum would be upheld if challenged in the courts recognize this problem. The separation of powers, which America’s Founders said was the most important single feature of our system of government, stands for the opposite idea—that it matters very much whether each branch has authority to act.

Even if the memorandum meets the letter of the law, it undermines the spirit of the law and sets a dangerous precedent for future administrations to exploit.  Congress—not the president and not the courts—must legislate.

This article by Thomas Jipping and Zack Smith first appeared in The Daily Signal on August 13, 2020.