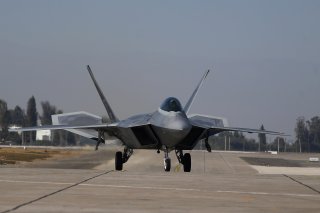 Here's What You Need to Remember: The world's most respected air superiority fighter still can't fly from aircraft carriers!

America’s F-22 Raptor is widely touted as the most capable air superiority fighter on the planet, thanks to a combination of stealth, speed, and maneuverability. It makes sense, then, that Congress pressed the U.S. Navy to consider fielding a slightly different iteration of the Raptor for duty aboard its Nimitz-class supercarriers back in the early ’90s.

In order to make the F-22 suitable for carrier duty, Lockheed Martin would have had to incorporate a number of significant changes to the F-22’s design. Alongside the usual changes one can expect out of a carrier-capable aircraft (things like a strengthened fuselage and added tail hook), a Navy variant of the F-22 would have needed to incorporate a variable sweep-wing design similar to that employed by the Navy’s existing F-14 Tomcats. This addition, perhaps more than any of the others, would have been a real challenge for engineers to contend with. Sweep wings were expensive to maintain to begin with, but incorporating a sweep-wing design into a stealth aircraft may have been nearly impossible without sacrificing some degree of low observability.

Want to know more about the effort to field F-22s aboard aircraft carriers? Make sure to read the full story this video was based on here.

What makes the F-22 so special?

The Lockheed Martin F-22 Raptor was the world’s first operational stealth fighter, and ushered in a new era of fighter jets we commonly know today as the “5th generation.” As the first aircraft in this new fighter generation, much of what we commonly consider requirements for a “5th gen” fighter is derived from capabilities the F-22 first brought to the table.

The F-22 Raptor was the first fighter ever designed with an emphasis on stealth and low observability right from the start. While 4th generation fighters like the F-15 Eagle, F-16 Fighting Falcon, and F/A-18 Super Hornet all employ some measures to reduce their radar signature, stealth is an intrinsic part of the F-22’s design. But it’s not just about being sneaky–the F-22 can also fly at speeds in excess of Mach 2.25 and execute incredibly acrobatic maneuver–thanks to its thrust vectoring capabilities. It can also sustain supersonic speeds without the use of its afterburner; which is one talent found in the F-22 that can’t be found in any other stealth fighter in the world.

The world’s only operational 5th generation fighters are the American F-22 and F-35, the Russian Su-57, and the Chinese J-20.