Why Douglas MacArthur Couldn't Hold the Philippines in 1942 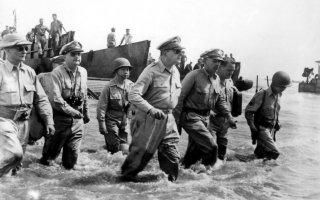 Here's What You Need To Remember: Unless the U.S. Navy could instantly resurrect the sunken battleships at Pearl Harbor, the Philippines were doomed. Backed by heavy air support, the Japanese eventually broke through the lines of starving and ill defenders.

The fall of Corregidor forces us to ask a tough question: what went wrong?

Dugout Doug MacArthur lies ashaking on the Rock
Safe from all the bombers and from any sudden shock
Dugout Doug is eating of the best food on Bataan
And his troops go starving on.

Dugout Doug’s not timid, he’s just cautious, not afraid
He’s protecting carefully the stars that Franklin made
Four-star generals are rare as good food on Bataan
And his troops go starving on.

Dugout Doug is ready in his Kris Craft for the flee
Over bounding billows and the wildly raging sea
For the Japs are pounding on the gates of Old Bataan
And his troops go starving on . . .