Why the F-14 Tomcat is Gone for Good 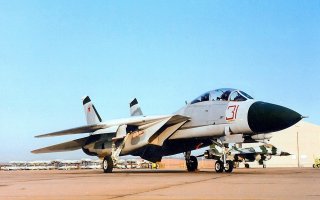 Here's What You Need To Remember: Computer technology has vastly improved processing speeds and an ability to perform procedural functions, organize information, and make determinations otherwise left to humans. Targeting sensors engineered to integrate with navigational and threat information more independently, which were already emerging to a great extent by the early 2000s, may have lessened the need for a human Naval aviator to travel in the plane.

The aircraft first flew as far back as 1970 and deployed from Navy carriers in 1974 and was ultimately cancelled in 2006 with the advent of the U.S. Navy’s F/A-18 Super Hornet. The F-18 was faster, more maneuverable, and more high-tech than the Tomcat, and emerged as a new generation of carrier-launched fighters.

The F-14s initially designed to counter Russian MIG fighters during the Vietnam War, and were then used against Iraqi planes by the Iranian Air Force during the Iran-Iraq war; they reportedly shot down at least 160 Iraqi aircraft while only 12 to 16 Tomcats were destroyed, according to a 2006 Air & Space Magazine report.

The F-14s are still used by the Iranian Air Force, and some have raised a question as to whether they were retired prematurely by the U.S. Navy. This raises an interesting question regarding technical progress. While there is clearly value in human decision making faculties adding to air attack with two-seater planes using a Naval aviator to support the pilot, the advent of newer sensor technology may have supplanted the need for a second person in the plane.

Why It Went Away:

Computer technology has vastly improved processing speeds and an ability to perform procedural functions, organize information, and make determinations otherwise left to humans. Targeting sensors engineered to integrate with navigational and threat information more independently, which were already emerging to a great extent by the early 2000s, may have lessened the need for a human Naval aviator to travel in the plane.

The F-35, for instance, was already moving along with engineering and development by 2006 and the F/A-18 was emerging as an improved, high-tech single-seat aircraft with advanced avionics and a different, single-pilot configuration. Sensor fusion, such as that enabled by the F-35, massively reduces what’s called the “cognitive burden” upon pilots needing to analyze variables and make real-time combat decisions. The more otherwise time-consuming procedures computers can perform, the fewer humans need to occupy time, faculties, and mental energy to complete functions easily done by computers. If targeting, navigational, and sensor data can be aggregated and organized for a human decision-maker, as is done by an F-35, the need for human cognition massively decreases. However, with a single pilot, an F-18 or F-35 can still operate with the unique and necessary attributes fundamental to human cognition, therefore optimizing performance.

Reducing the human load of course lessens the risk to pilots but may also make an aircraft more maneuverable, faster, and potentially more agile in the sky. Avionics, electronics, sensors, and weapons can easily be upgraded, something which could lead people to make the case for continuing newer variants of the Tomcat, yet retiring a two-seater structural configuration may have nonetheless been necessary to enable improved aerial performance for future aircraft.

Kris Osborn is the Defense Editor for the National Interest. Osborn previously served at the Pentagon as a Highly Qualified Expert with the Office of the Assistant Secretary of the Army—Acquisition, Logistics & Technology. Osborn has also worked as an anchor and on-air military specialist at national TV networks. He has appeared as a guest military expert on Fox News, MSNBC, The Military Channel, and The History Channel. He also has a Masters Degree in Comparative Literature from Columbia University. This article first appeared earlier this year.