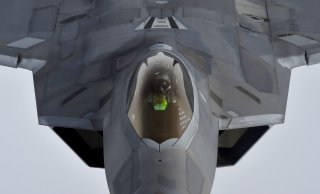 Here’s What You Need to Remember: Things might not be over for the YF-23, though. The Air Force passed on the plane, but it remains a top-notch aircraft—and other countries, incensed at export restrictions on the F-22, might be inclined to make use of it.

In the 1980s, the Cold War was reaching its highest point—and the U.S. Air Force was searching for a new jet fighter.

The jets that the Air Force operated at the time, including the F-14 Tomcat and the F-15 Eagle, were still in the prime of their operational service, but new Soviet fourth-generation fighters such as the Sukhoi Su-27 and the Mikoyan MiG-29 were proving adept as direct competitors to U.S. aircraft. The Air Force wanted something better—and to find it, they held a contest among defense contractors, the “Advanced Tactical Fighter” (ATF) competition.

At the end of the contest, two aircraft were anointed as finalists: the YF-22, built by Lockheed, Boeing, and General Dynamics, and the YF-23, built by Northrop and McDonnell Douglas.

Both aircraft were revolutionary new designs, bringing all that the United States had wanted to the table. The two were very similar in capabilities; of the two, the YF-23 was faster, and it also proved to be harder to detect on radar, though the YF-22 was more maneuverable.

The largest difference between the two planes, however, was in their sharply differing appearances. While the YF-23 appeared similar to existing Lockheed designs, the YF-23’s wings resembled a diamond, with a smaller profile than the YF-22. Two YF-23 prototypes were ultimately built; each was equipped with in-flight refueling capabilities and a weapon bay that could have held four AIM-120 missiles. If the aircraft had gone into production, it could have also been equipped with a 20-millimeter Vulcan cannon and an additional weapon bay for Sidewinder missiles.

But, forced to choose between the two aircraft, the Air Force ultimately preferred the YF-22, and that plane ultimately became the F-22 Raptor, which continues to fly and has been regarded by some as the best fighter aircraft in the world. The two YF-23 prototypes were ultimately shunted off to museums; one is in the National Museum of the U.S. Air Force in Dayton, Ohio, while the other is (as of 2010) in the Western Museum of Flight in Torrance, California.

Things might not be over for the YF-23, though. The Air Force passed on the plane, but it remains a top-notch aircraft—and other countries, incensed at export restrictions on the F-22, might be inclined to make use of it. Japan, in particular, is looking for a new fighter—and, as in 2018, speculation had arisen that Tokyo might make use of the YF-23 as the basis for a Japanese jet.