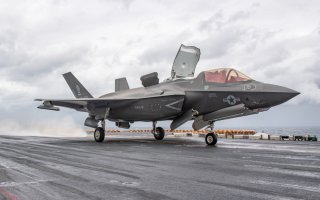 Here's What You Need To Know: The F-35 JSF is built to take on great power competitors like Russia or China who operate advanced air defense systems. The F-15EX, despite all the hype, is not.

The F-15EX is, at least in terms of its external configuration, modeled upon 1980s engineering, yet it does contain quantum-like improvements in computing, radar range, and sensitivity, avionics, sensing and weaponry. However, it simply is not stealthy. its construction, configuration, coating and external shape do not resemble the stealthy exterior of an F-22 or F-35, and it does not appear to have an internal weapons bay,