Why the F-35 Would Be Key to a U.S. Victory over China 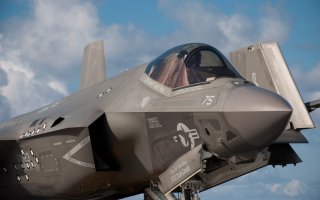 Here's What You Need to Know: Beijing simply cannot match the F-35.

Carrier-launched airstrikes from the East China Sea, destroyer-fired cruise missiles from the Taiwan straits, high altitude stealth bombing missions flown from Guam, one-thousand-mile land missiles fired from Japan and, perhaps most of all, a massive, multi-domain amphibious assault supported by stealthy fifth-generation aircraft, would all likely be called upon in the event of a major military confrontation between the United States and China.

The sheer size, vast geographical expanse and limitless ocean areas of the Pacific present a circumstance wherein the only actual path to military victory against China would require a coordinated multi-domain approach. One interesting element of this which seems to offer itself as a thread of continuity between otherwise disparate methods of attack could be the integrated use of Navy, Air Force, and Marine Corps F-35s.

Should fast-maneuvering, carrier-launched stealth F-35s be able to find and destroy Chinese road-mobile missile launchers and, working in tandem with high-altitude stealth bombers and long-range precision weapons such as submarine-fired cruise missiles, destroy Chinese air defenses, the most advantageous method of attack might be envisioned as a massive amphibious assault supported by Marine Corps F-35B variant.

Amphibious attack staged from Japan, Taiwan, South Korea or even Australia might make the most sense, as it could combine large numbers of unmanned systems such as surface, air, and undersea surveillance and attack drones with ship-to-shore combat vehicles, troop and equipment-transporting landing craft and, perhaps of greatest significance, fifth-generation F-35B jets. Amphibious-launched F-35B jets could bring new ranges and close-air support possibilities to an amphibious attack upon mainland China intended to secure a beachhead of sorts for a follow-on land campaign.

Although air-sea, and likely undersea, elements are likely to provide any measurable margin of victory in a war against China, final superiority would invariably need to incorporate some kind of land presence. Perhaps some kind of ground invasion or presence would ultimately prove decisive? What about any kind of major land assault?

Should such an option actually be considered, it would likely only be introduced in the event that some kind of decisive or measurable air superiority was already established, something certain to involve F-35 jets. Essentially, it would seem that any kind of decisive U.S. military ground presence in China, while likely dismissed as simply not possible by some, would only come to fruition in the event that Chinese road-mobile HQ-9 air defenses were destroyed, its growing fleet of J-20 and J-31 fifth-generation aircraft were somehow neutralized and its ballistic missile launchers were hit or rendered largely inoperable.

All of these missions, which could even be thought of as a kind of prerequisite for any kind of land invasions, could be fully performed if not greatly assisted through the use of F-35 jets. While of course engineered to dogfight if needed and rely upon long-range sensors and advanced weapons to prevail in any air-to-air engagement, the F-35 jet might actually prove most valuable against China in an intelligence, surveillance and reconnaissance capacity given the expansive mix of maritime and land domains spread throughout the Pacific in need of being connected to one another.  By virtue of being engineered with a drone-like surveillance capability, an airborne F-35 jet could function as a multi-domain informational relay “node” or aerial sensor. Its long-range 360-degree sensor suite could find and identify air-threats. It could also help discover mobile ground targets such as Chinese armored vehicles, air defenses, or ships at sea.

The F-35 jet’s aerial sensor capacity has already been well established as the aircraft was demonstrated to be effective as an aerial “relay” node in a now-deployed ship-defense system called Naval Integrated Fire Control-Counter Air. NIFC-CA was first deployed in 2015 as an integrated system combining ship-based Aegis radar, SM-6 interceptor missiles, and an “aerial sensor” relay node to detect, track and destroy incoming enemy anti-ship missiles at ranges far beyond the horizon and therefore otherwise undetectable by most standard ship-based radar. While NIFC-CA was first envisioned with an E2-D Hawkeye surveillance plane operating as the aerial relay, an F-35 jet was used in this capacity with great success, a prospect which therefore also introduces offensive attack possibilities in new ways as well.

An F-35 jet can function as a multi-domain sensor connecting not only to other F-35 jets but also to surface ships, land-based weapons, and other vital air assets such as the F-22 jet. New two-way LINK 16 datalink upgrades are now greatly improving F-35-to-F-22 information sharing in combat in new ways, something which multiplies and integrates surveillance and attack possibilities. An F-35 jet could, for instance, use its sensors and Mission Data Files threat library to find groups of approaching Chinese J-31 jets at great standoff ranges before it was discovered itself, and then instantly send intelligence to F-22 jets in the vicinity equipped to attack with its air-to-air superiority technologies. Actually, extending upon this reasoning, perhaps this kind of combined attack involving F-35 and F-22 jets might offer itself as one of the few ways to truly outmatch and destroy Chinese fifth-generation J-31 and J-20 stealth aircraft in the air.

Also, pre-deployment staging and preparation for a large mechanized armored force would be necessary for any kind of major land incursion, a scenario for which there may be limited options. Certainly, a strengthening India-U.S. alliance might enable heavy forces to enter China from India, yet the mountainous plateau areas in Tibet just across the Indian border makes the prospect of any kind of land advance into large portions of China next to impossible. Added to this complexity is the fact that China has already engineered combat vehicles for the specific purpose of conducting combat operations in the mountainous plateau areas of Western China. F-35 jets launched from India to attack Chinese targets in the mountainous plateau regions of Western China, for example, might prove far more effective than any effort to advance ground units through uneven terrain.

Furthermore, China’s land force of course massively outnumbers the United States in terms of sheer personnel; the United States is reported by GlobalFirepower.com to operate 1.4 million active personnel, whereas China is cited as having nearly twice as many at 2.1 million. Interestingly, despite China’s overwhelming advantage in troop numbers, the United States is reported to operate as many as six thousand tanks, nearly twice the thirty-two hundred tanks operated by China. Upgraded U.S. Abrams tanks may be superior to advanced Chinese T99 tanks as well, yet that might not matter much given that there are few routes even remotely hospitable to armored vehicle passage as well as little to virtually no real workable point of entry for large scale land forces given China’s Western terrain. Any approach route involving a large U.S. force in South Korea would need to first somehow pass through North Korea, a circumstance which may point to South East Asia as one of the few, if not only areas amenable to a large insertion of ground forces. However, should large mechanized land units somehow pass into mainland China for an invasion . . . how are they supposed to advance? China’s uneven geography may simply preclude any kind of massive ground surge toward Beijing.

The F-35 jet is, according to Air Force and Navy thinking, well suited for close air support (CAS) missions, given its speed, maneuverability, twenty-five-millimeter cannon and ground-targeting sensor suite. Certainly, any kind of advancing ground force would need to operate with CAS, a topic that continues to receive much attention, particularly in light of conversations related to the extended life of the A-10 Thunderbolt. The CAS mission, it seems clear, is also well supported by the F-35 platform because the stealth jets could offer close-in firepower protection to maneuvering ground forces or greatly impact the equation in an amphibious landing by lending a new dimension of air support to amphibious vehicles traveling ship to shore over the ocean.

The F-35 jets much-discussed sensor fusion could in this instance organize targeting and navigational mapping data together into a single, integrated picture for pilots, enabling them to make fast-informed decisions about where to attack and maneuver in relation to several interwoven variables. Often regarded as some early iterations of artificial evidence, the F-35 jets “sensor fusion” takes otherwise disparate pools of sensor data and analyzes them in relation to one another to offer pilots a single screen overall picture of a combat circumstance. F-35 jets like to refer to the platform as a “flying computer” for this reason, as it is intended to operate as an information aggregator, analyzer and transmitter as much as anything else. Incoming sensor data can be bounced off of a seemingly limitless database of known threats, factors, and conditions to help artificial-intelligence-enabled computer-generated solutions, answers, or recommended courses of action for pilots.

All of these factors point to the seemingly somewhat self-evident reality that any kind of military victory over China would rely largely on a mix of airpower, Naval attack, and, perhaps most of all, a massive air-surface-undersea coordinated amphibious assault.