Why Fixating on the Size of America's Navy Is Just Silly 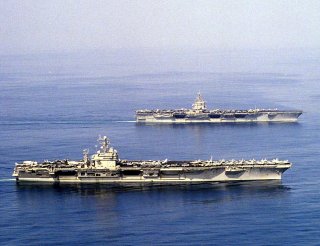 The second noxious factoid relates to budgets. All too often even knowledgeable pundits or officials cite the U.S. defense budget relative to likely competitors and conclude American supremacy is guaranteed. Because Washington spends more than the next Y powers combined—Y, like the X in tonnage comparisons, being some double-digit figure—then victory must be a sure thing. If you spend more you must have purchased superior strength. Right?

Not necessarily. He who spends the most may not win, just as he who weighs the most may not. Officialdom must not draw false comfort from budget comparisons suggesting that the United States holds a lopsided advantage over its rivals because it outspends them. Again, think about where likely sea fights will take place: in waters and skies close to hostile shorelines. The U.S. military must maintain pricey base infrastructure, not to mention those bigger, more expensive ships, planes, and armaments, merely to get into the battle zone. Fighting close to home is cheap by contrast. Advantage: red teams. Prevailing against distant opponents off their own coasts tends to cost you more than it costs them.

You would think the wars in Afghanistan and Iraq had put paid to the conceit that the bigger, higher-tech, more expensive force inevitably triumphs. Substate enemies brandishing makeshift weaponry gave the U.S. and coalition armed forces fits during those conflicts. Afghanistan is sputtering to an indecisive conclusion at best. It’s hard to imagine that China, or Russia, or Iran would fare more poorly than the Taliban or Iraqi militant groups considering all the resources these martial states can tap.

That’s the trouble with the undead: you can’t reason with them. You have to shoot down ghoulish ideas one by one when the herd swarms. Looks like we’d better stockpile ammunition for a long siege.

James Holmes is J. C. Wylie Chair of Maritime Strategy at the Naval War College, coauthor of Red Star over the Pacific.