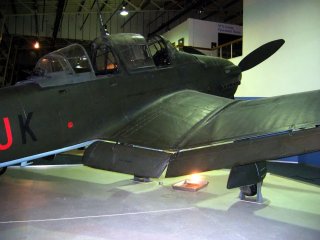 Here's What You Need To Remember: The Stuka was terrifying - if you were on the ground underneath it. However, the planes were not adept at air-to-air combat, as their losses during the Battle of Britain proved.

Perhaps no weapon was as closely associated with the Nazi German in early in World War II as the Stuka dive bomber, infamous for howling, near-vertical dive attacks on warships, battlefield targets and defenseless civilian communities like merciless birds of prey.

However, the Stuka’s reputation did not survive the war it helped kick-off as it proved less and less survivable in the face of capable opposition.

The dive bomber was a solution to a timeless challenge in military aviation: how to ensure weapons dropped by fast-moving aircraft land anywhere near a point target like a warship, artillery battery or fortification. Precision was an especially big problem in an era where tactical aircraft could carry only light, unguided bombs.

In the early 1930s, German World War I ace and stuntmen Ernst Udet was impressed by American F11C Goshawk fighters he saw perform steep dive-bombing attacks.  Upon joining the Nazi Party in 1933 he imported two Goshawks for test-flying and insisted the fledgling Luftwaffe develop a specialized dive bomber—an aircraft that could withstand the strain of pulling out of steep dives without smashing into the ground or ripping its wings off.

Engineer Hermann Pohlmann of the Junkers company devised a two-seat monoplane with fixed landing gear covered by spiffy ‘spats’ and distinctive inverted gull-wings that helped lift the fuselage high enough off the ground to accommodate its large propeller. In addition to two rifle-caliber machineguns in the wings, the radio operator had a rearward-facing gun to protect against enemy fighters.

Powered by a Jumo 211 engine, the Ju 87 beat out competing models in an aircraft design competition and saw initial combat-testing in the Spanish Civil War in 1938-1939. The Stuka was slow with a maximum speed of 200-240 miles per hour in level flight and had a short combat radius of only 245 miles. It typically carried a single 551-pound bomb under the fuselage (released by a crutch-like dispenser to avoid hitting the propeller) and four 110-pound bombs under the wings.

Stuka pilots spotted targets through a floor window, then rolled their aircraft completely around into a dive as steep as 90 degrees. Underwing dive brakes would extend automatically, controlling diving speed to just over 350 miles per hour, buying the pilot time to line up his attack using controls switched to ‘dive mode’ and lines etched into canopy side to judge his dive angle.

Special propeller-sirens on their landing gear called Trumpets of Jericho produced an infamous howling sound intended to terrorize bystanders on the ground.  However, the sirens were later removed as they reduced speed by 5-10%.

Pilots typically released bombs at just 1,500 feet and then engaged an automated system to yank the Stuka upwards. This was vital, as such dives exerted five to six times the force of gravity on the pilot, constraining blood flow to the brain and causing temporary “grey-outs.”

Even the purpose-built Stuka was not immune to the dangers of this method of attacks. Two weeks prior to the invasion of Poland, thirteen Stukas and their crews were lost in training at Neuhammer when fog caused them to misjudge a dive.

The Luftwaffe fielded 336 Stukas at the onset of World War II and lost only 31 in the Polish campaign. They launched the first strikes of World War II and claimed the first air-to-air kill when a Stuka pounced on a Polish P.11 fighter taking off. When Polish forces counterattacked at the River Bzura with some success, Stukas and Panzers reacted swiftly to crush the threat.

The Ju 87B was the primary early-war model, but there were also folding-wing Ju 87C torpedo/dive bombers for the never-completed carrier Graf Spee, and longer-range Ju 87Rs.

The Stuka’s precision made it a deadly anti-ship weapon. Stukas sank most of the Polish Navy, crippled two cruisers and destroyed several Allied destroyers and sloops and during the invasion of Norway, and harried vessels evacuating Allied troops at Dunkirk.

Over 400 Stukas served as ‘flying artillery’ in the Battle of France and the Low Countries, helping forward units beyond the reach of artillery support, such as German paratroopers and fast-moving Panzer divisions, by knocking out artillery concentration, heavy British and French tanks units, and fortifications like Belgium’s Ebe- Emael that could impede their advance.

Despite the Stukas’ tactical utility, they were also associated early on with terror attacks on civilians. In 1938, three pre-production Ju-87A models were ‘combat tested’ in Spain by attacking villages of no military value, killing 38 civilians. Over Poland, Stukas obliterated 70% of the buildings in the town of Wielun despite it being devoid of military targets. In France, Stukas notoriously strafed columns of refugees, driving them into the path of Allied columns.

However, dive bombers are extremely slow and vulnerable when pulling out of a dive. Stuka losses were initially tolerable because German fighters had achieved air superiority over their foes.  Even then, roughly 120 Stukas were lost over France and the Low Countries.

The Stuka’s limitations caught up with it during the ensuing Battle of Britain—the campaign to destroy the Royal Air Force in preparation for a German amphibious landing. Stuka units were tasked with knocking out British Chain Home early warning radars, and coastal convoys and airfields.

But the RAF’s modern Spitfire and Hurricane fighters were tough adversaries on their home turf, assisted by radar and the buffer of the English Channel.  In just three weeks in August, the Luftwaffe lost 51 Ju 87s—including 16 in one day. The Stuka had to be withdrawn from the fight.

Battle for the Eastern Front:

Still, the Ju 87 remained successful in theaters where aerial opposition was weak, such as the Balkans, Mediterranean and Russia in 1941-1942. Stukas ravaged Allied forces in Yugoslavia, sank numerous British warships off Crete, destroyed much of the Soviet air force on the ground in June 1941, and blunted counterattacks by heavier Russia tanks. Germany also exported Stukas to allies including Bulgaria, Italy and Romania.

To stem the thousands of tanks pouring out of Soviet factories, in 1943 there followed the tank-busting Ju-87G model, armed with a long-barreled 37-millimeter automatic cannon pod under each wing with a magazine of six tungsten high-velocity shells. These could penetrate Allied tanks if they struck the vulnerable top or rear armor.

Pilot Hans-Ulrich Rudel claimed in his memoire Stuka Pilot to have destroyed 519 tanks, sunk the battleship Marat, and shot down 52 aircraft mostly while flying a Stuka. While Rudel’s claims are surely exaggerated given the tendency for tremendous over-claiming of air-to-ground kills during World War II, another statistic is equally telling: Rudel was shot down or crash landed 32 separate times.

The swan song of the Stuka came in July 1943 at the titanic tank battle at Kursk. Stuka Geschwaders 1, 2 and 3—half equipped with cannons—launched massive airstrikes on Soviet tank units alongside Fw-190 fighter bombers and Hs-129 anti-tank aircraft.

However, Soviet Il-2 Shturmovik bombers also claimed huge successes against German tanks at Kursk. Though superficially similar to the Ju 87, the Shturmovik was more heavily armored and had forward-facing cannons, ad even acquired a reputation for hunting Stukas.

Demise of the Dive Bomber:

By 1944, the dive-bomber was largely replaced by far more survivable and hard-hitting ‘jabos’: robust, high-speed fighter bombers like the Fw-190F with maximum speeds exceeding 300 or 400 miles per hour.

While their high-speed, low-altitude attacks were not as precise a dive-bombing, late-war fighter bombers had punchier rockets and forward-firing cannons or .50-caliber machineguns to strike point targets and could carry heavier bombs to blast area targets. Most importantly, they weren’t sitting ducks when enemy fighters showed up.

By 1945, the Luftwaffe had only 100 operational Stukas out of around 6,000 built. These continued to harry Russian armies entering Germany, scoring occasional successes due lapses in Soviet air superiority. Only three intact Ju 87s survive today.

The Stuka played an important role in the Wehrmacht’s early campaigns, knocking out obstacles to the relentless advance of German Panzer divisions with precision strikes. But white-knuckle dive-bombing tactics proved a dead end when facing significant aerial opposition. Though the Stuka led a respectable second career as a cannon-armed tank buster, the infamous warplane was doomed to be replaced by more versatile and survivable fighter-bombers.

Sébastien Roblin holds a Master’s Degree in Conflict Resolution from Georgetown University and served as a university instructor for the Peace Corps in China. He has also worked in education, editing, and refugee resettlement in France and the United States. This article first appeared in 2019.