Why Japan’s Helicopter Destroyers are Aircraft Carriers in Disguise 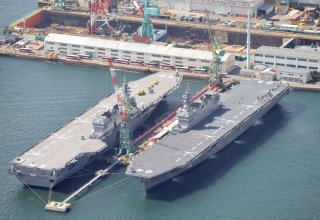 Here's What You Need to Know: The issue will remain emotionally fraught both in Japan and China—which explains why though the concept has clearly been mulled since the the Izumo-class was first designed, discussion of the possibility has been veiled by terminology such as ‘helicopter destroyer.’