Why Is Japan Downsizing Its F-15 Fleet? 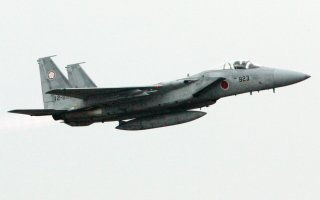 Japan has the largest fleet of F-15 Eagle fighters outside of the United States. The powerful twin-engine fighters combine high speed, potent radars, and heavy fuel and weapons loads to play a critical role patrolling the expansive seas around the Japanese archipelago.

However, with tensions with China and North Korea on the rise, the Japanese Air Self-Defense Force (JASDF) is looking to pawn off the older half of its Eagle fleet to pay for over a hundred new F-35 stealth fighters—even if they aren’t optimized for the same role.

Japan’s F-15Js and F-15DJ two-seat trainers are the only models of the legendary jet built outside of the United States (though an initial few were built in McDonnell-Douglas’s St. Louis plant). In the mid-1970s, Japan arranged for Mitsubishi Heavy Industries to license-manufacture a domestic model of the F-15C air superiority fighters, along with its F100 turbofans.

Unlike the later Mitsubishi F-2, a heavily altered Japanese variant of the F-16, the F-15J had only minor differences from the F-15C. Because the United States was unwilling to transfer certain technologies, the F-15Js came with Japanese-designed datalinks, J/APR-4 radar warning receivers and J/ALQ-8 electronic countermeasure systems. They also came with racks for unguided Mark 82 bombs.

The first F-15J flew in 1980, and the aircraft entered operational service in 1982—at the time, by far the most capable jet flown by an East Asian air force. The later half of the 213 F-15Js built were Multi-Stage Improvement Package models (F-15MJs), featuring more powerful computers and digital displays, improved air conditioning, an additional J/APQ-1 radar warning system, and compatibility with Japanese missiles. Those include the short-range heat-seeking AAM-3 missile and the radar-guided AAM-4 with a range of sixty-two to seventy-five miles.

Tokyo also planned to develop an RF-15 reconnaissance jet with surface-scanning synthetic aperture radars, but this program was canceled in 2010.

Japan’s Eagles have been very busy intercepting intruding Russian and Chinese aircraft nipping at the edge of Japanese airspace. In 2018, the JASDF scrambled four-ship flights 900 times (nearly three times a day) to intercept inbound Chinese and Russian aircraft. The increased pace of Chinese activity particularly is leading the F-15J fleet to burn through airframe hours at an extraordinary rate, which may compel Japan to stop trying to respond to to every intrusion.

Routine patrols and training are not without risks: the JASDF lost a dozen F-15Js in accidents from 1983-2011, including two in a deadly mid-air collision in 1988. In 1995, an F-15J was shot down by a Sidewinder missile accidentally fired by its wingman during a mock dogfight, but fortunately pilot Tatsumi Higuchi successfully ejected.

Retiring the Old to Bring in the New

Roughly half of Japan’s Eagles are F-15MJs which have received an uneven succession of upgrades, including more powerful APG-63(V)1 radars, Link-16 datalinks interoperable with U.S. military units, and upgraded F100-PW-220 turbofans with digital engine controls.

Some have also received Infrared-Red Search and Track (IRST) system pods nestled on the nose and interfaces for Helmeted Mounted Sights compatible with AAM-5 missile, basically the Japanese equivalent to the AIM-9X Sidewinder. The AAM-5s boast vector-thrust engines allowing them to pull of tight maneuvers and can lock-on after launch if necessary. Though shorter-range than radar, an IRST is more discrete and may be particularly useful versus stealth fighters like China’s new J-20s.

The other hundred Eagles are early-production F-15SJs which have not received any upgrades. Though still fast and heavy-hauling, a lack of modernized sensors, weapons systems and defensive avionics leave F-15SJs deficient in situational awareness and attack range compared to China’s latest jet fighters. For example, for beyond-visual-range engagement, the F-15SJs must use old AIM-7F Sparrow missiles which require the launching aircraft continuously illuminate its target right up to the moment of impact instead of fire-and-forget AAM-4s.

In December 2018, media reported that Japan would replace its F-15SJs with roughly 105 F-35A and F-35B Lightning stealth fighters in addition to the forty-two F-35s already being delivered to replace its F-4EJ Phantoms. (F-35B jump jets will be deployed at sea onboard Japanese Navy Izumo-class “helicopter destroyers.”) The F-35s are expensive, though—and Japan revealed it planned to sell its older F-15SJ to the United States, which would broker their resale to a “southeast Asian country.”

The F-35’s stealthy radar cross-section and powerful networked sensors allow it to detect and engage adversaries before it is detected in return, unlike the very indiscrete F-15. However, the Lightning is designed as a strike plane for penetrating enemy airspace rather than defensive counter-air patrol; compared to an F-15, the F-35 has half the range, more limited payload capacity when in stealth mode and two-thirds the maximum speed at Mach 1.6. Therefore, while the F-35A is more survivable versus advanced fighters and surface-to-air missile systems, it is not an ideal replacement for the F-15J.

Underscoring the challenges such patrols pose, on April 9 the first Japanese-assembled F-35A crashed into the Pacific Ocean while on a training. The cause of the second F-35 airframe loss ever remains unclear at the time of writing.

Japan has sought a stealthy air superiority fighter like the F-22 Raptor for a long time. Though reports in 2017 suggested it was considering a fifth-generation F-22/F-35 hybrid, its 2019 Mid-Term Defense Program revealed Japan was shelving foreign bids in favor developing of its own sixth-generation F-3 stealth fighter, presumably based on its X-2 Shinshin stealth demonstrator jet.

The F-3, if on schedule, will only enter service in the mid-2030s. Thus, in 2018 Tokyo revealed plans to spend roughly $500 million upgrading the F-15MJ fleet, starting with an initial $89 million to outfit two upgraded prototypes. The program will make uniform pre-existing upgrades such as AAM-5 capability, Link-16 datalinks and IRST systems, as well as introduce new bits of technology. One likely inclusion is an APG-63(V)3 Active Electronically Scanned Array (AESA) radar like those equipped on U.S. F-15Cs. AESA radars are dramatically more powerful, discrete and jam-resistant than earlier types.

The F-15s will also have their weapons capacity increased, probably with new quad-missile racks increasing the maximum number of weapons carried from eight to eighteen (four quad-racks plus two short-range missiles on the wingtips.) This could help offset China’s six-to-one numerical superiority in aircraft

Japan has also announced it is making its F-15MJs compatible with the AGM-158 JASSM stealth cruise missile, a standoff weapon designed to home-in on enemy air defense radars from over 230 miles away. The JASSM procurement indicates the traditionally defense-oriented JSDF believes it may need to attack land targets protected by air defense missiles—think China and North Korea’s ballistic missile arsenals, which may pose a bigger threat to Japan than manned aircraft. Possibly other less expensive air-to-surface munitions or even jamming pods could be integrated, transforming the F-15Js into true multirole jets.