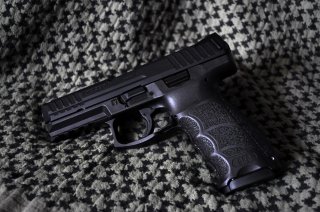 Here's What You Need to Remember: Accuracy is the most important characteristic in Japanese pistol training, with speed being of secondary importance. With the Minebea P9, emphasis is placed on landing accurate shots in single action mode, as opposed to learning to fire a rapid double-action first shot followed by single-action shots.

On the 6th of December 2019, the Japanese Ministry of Defense (MoD) announced that they would adopt a new pistol, the Heckler and Koch SFP9 for the Japanese Self Defense Forces (JSDF). This marks the first time the SFP9 has been adopted by a national military; prior it was only bought by police organizations. The SFP9 is slated to replace the Minebea P9, a license-produced variant of the SIG P220.

From the Japanese MoD’s Fiscal Year 2018 budget, we know that the H&K SFP9 competed against the Glock 17 and Beretta APX. Given the recent dominance of Glock at winning contracts worldwide, H&K’s win comes at a small surprise. But a look into Japanese small arms training provides a possible reason why.

Accuracy is the most important characteristic in Japanese pistol training, with speed being of secondary importance. With the Minebea P9, emphasis is placed on landing accurate shots in single action mode, as opposed to learning to fire a rapid double-action first shot followed by single-action shots.

If such emphasis is placed on accuracy, the SFP9 has the edge over the Glock. In factory configuration, the SFP9 is considered to have a better trigger than a stock Glock, with less creep and a crisper break.

The SFP9 also has a more customizable grip, with exchangeable side panels and rear grip sections being provided with each pistol as issued. The Glock only comes with additional rear backstraps, so the user can only adjust the length of the grip, not the width. The SFP9’s grip is also more rounded than the Glock’s grip, which some users find boxy.

The SFP9 also doesn’t require pulling the trigger to disassemble. While the Glock has served in many conscript militaries without this being an issue, it still does pose some level of risk. As the Japanese MoD did not evaluate the Glock model that can be disassembled without pulling the trigger (the Glock 46), the SFP9 holds an advantage in this regard from a risk management perspective.

Finally, the SFP9’s adoption could have benefited from the existing relationship between H&K and the JSDF. Special purpose Japanese units are known to use H&K USP pistols, so the JSDF is already familiar with how H&K handles maintenance, training, and support for their products. Glocks on the other hand, are not known to be used in large numbers by any JSDF unit.

Regardless, the adoption of the SFP9 by the JSDF is a major milestone for the pistol. Despite some commentary and speculation that the SFP9 (or VP9 on the American civilian market) was not “military” ready, the JSDF’s adoption may open the gates for other militaries adopting the pistol in the near future.