Why the KC-46 Pegasus is Indispensable to the U.S. Air Force 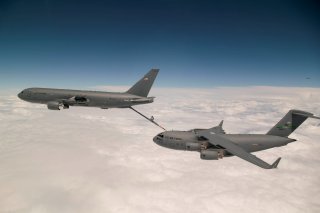 Here's What You Need to Know: In some respects, the success of the K-46 is the most important of the Air Force's modernization programs. It is the capability of the aerial refueling fleet that gives the Air Force its global reach and the ability to concentrate decisive military power wherever it chooses.

Last week, the KC-46 Pegasus aerial refueling aircraft passed one of its two final milestones prior to entering service with the U.S. Air Force. The Federal Aviation Administration (FAA) granted the platform a supplemental type certificate. The KC-46 had previously received the FAA’s amended type certificate which addressed its basic airworthiness and performance. This second certificate addresses the aircraft’s refueling and mission avionics systems. While the Pegasus still must be granted its military type certificate, which covers specialized military functions and systems, all testing required for this certificate has been accomplished.

Now nothing stands in the way of the KC-46 entering service. This is a rather remarkable achievement for a program that only began in 2011 and which even late last year was struggling to resolve problems with parts of its refueling system. The Air Force is now scheduled to receive its first production tanker this month with the remaining 17 aircraft required under the original contract to be delivered no later than April 2019.

The KC-46 is primarily intended to replace the aging KC-135 Stratotanker. The KC-46 will be a substantial improvement over the KC-135 regarding the amount of fuel it can deliver and its cargo capacity. Equally important, the maintenance costs associated with the KC-135 are becoming prohibitive. One reason the Air Force began pursuit of a new tanker at the turn of the millennium is that it could see the writing on the wall concerning the costs of maintaining the KC-135 fleet. Since 2001, with the expansion of global air operations as part of the war on terror, the tanker fleet has been employed more intensively than had been anticipated with a resulting increase in wear and tear on the aircraft and a sharp rise in maintenance costs.

The challenge posed by sustainment costs is the primary reason why the Air Force plans to begin its recapitalization of the tanker fleet by retiring its 58 KC-10 Extenders, even though this aircraft is newer and more capable than the KC-135. While the KC-10s continue to perform well, the higher total cost of ownership associated with the relatively small size of this fleet dictated the Air Force’s decision to retire them.

With its expanded operational envelope, fuel capacity and ability to service multiple aircraft simultaneously, the KC-46 will multiply the operational effectiveness of Air Force, Navy and Marine Corps assets. In addition, the KC-46 will be able to provide critical refueling support to allied nations in Europe, the Middle East and East Asia.

The KC-46 is entering service in the nick of time. In an era in which great power competition has re-emerged as the primary focus of U.S. national security planning, the demands on air mobility assets overall, but refueling tankers, in particular, are certain to increase. The current head of U.S. Transportation Command, General Darren McDew, testified recently before Congress that the current operating tempo for the tanker fleet requires a fleet of 1,000 aircraft.

The Air Force’s current plan is to reshape its current tanker fleet by 455 aircraft by retiring the KC-10s and some 98 older KC-135s while acquiring a minimum of 179 KC-46s to complement a residual force of 300 KC-135s. It is all but certain that the Air Force will acquire more KC-46s than the planned 179. Having retired the KC-10s in a bid to rationalize is tanker fleet, why would the Air Force pursue development of another refueling aircraft? Given the existence of a hot production line, it would make sense to continue to procure the KC-46 in greater numbers while retiring KC-135 at an accelerated rate.

The current commander of the Air Force’s Air Mobility Command (AMC), General Carlton Everhart, has floated the idea of structuring the KC-46 program for spiral development with improvements being added to the aircraft on a regular schedule. That way, he suggested, AMC could receive the benefits of operating the KC-46 now while investing in upgrades that would keep the aircraft relevant for the next 100 years.

The sustainment model for the KC-46 is likely to be quite different from that for existing Air Force tankers. Some 95 percent of the parts on the KC-46 are the same as those on the commercial 767. The aircraft’s engines are a derivative of Pratt & Whitney’s commercial PW4000-94. With some 740 767’s still in operation and new cargo variants coming off the production line, the Air Force could take advantage of this aircraft’s existing installed base of maintenance, repair and overhaul capabilities in the private sector and a global inventory of common spare parts. Moreover, the Air Force can improve the overall pace of maintenance activities while lowering costs by adopting commercial best practices.

All four of the Air Force’s priority modernization programs, of which the KC-46 is one, appear to be making substantial progress. The F-35 Joint Strike Fighter has completed the most rigorous testing program in modern aviation history. It is reported that the B-21 bomber will go through its critical design review by year’s end. The Air Force will announce the winner of the competition for the new T-X trainer within the month.

In some respects, the success of the K-46 is the most important of all these achievements. It is the capability of the aerial refueling fleet that gives the Air Force its global reach and the ability to concentrate decisive military power wherever it chooses.

This first appeared in RealClearDefense here.This piece was originally featured in September 2018 and is being republished due to reader's interest.