Why Myanmar is Rising Up in After a Military Coup 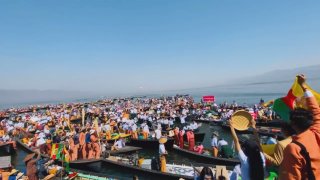 Protests have rocked Myanmar in recent days as people take to the streets demanding the release of Aung San Suu Kyi, the country’s de factor leader who was arrested alongside the president, Win Myint, on February 1 when the military seized power.

We speak to DB Subedi, Postdoctoral Research Fellow at the University of New England in Australia, who explains that the Myanmar of 2021 is a very different place to the country which emerged from nearly 50 years of military rule in 2011. “They know the difference,” he says. “How it feels to live under under a democratically elected government with political freedom.”

We also talk to Adam Simpson, Senior Lecturer in International Studies in Justice and Society at the University of South Australia, who explains that the coup came a few months after a resounding victory for the National League for Democracy, the party of Aung San Suu Kyi, in November 2020 elections.

He says it’s difficult to see what the military will gain from seizing power. “The military’s had such a cosy situation ever since the new constitution and the transition to a sort of semi-democracy,” he says, adding that what’s happened “just puts this at risk”. Simpson tells us the military has few options now open to it as protests grow: “None of them are probably attractive to them at the moment.”

Current research suggests that the coronavirus fuelling the ongoing pandemic started in bats before jumping into humans. Today, humans are by far the major host of SARS-CoV-2, but that’s not to say the virus can’t spill back into wild animals.

Kaitlin Sawatzki is a virologist at Tufts University and part of a project that is searching for the coronavirus in wild animals across the US. So far, her team hasn’t found anything, but other researchers captured a wild mink in Utah that tested positive for the coronavirus late last year.

In this episode, Sawatzki explains how viruses can jump back from humans into wild animals, the times this has happened in the past, and the risks – to both people and animals – when it does.

And we finish this week’s episode with some reading recommendation on Donald Trump’s second impeachment from Catesby Holmes, international editor at The Conversation in New York.

The Conversation Weekly is produced by Mend Mariwany and Gemma Ware, with sound design by Eloise Stevens. Our theme music is by Neeta Sarl.

A transcript of this episode will be available shortly.