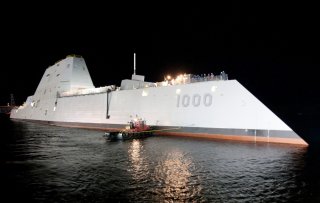 Here's What You Need To Remember: Handling the rough seas of major maritime combat is, of course, an indispensable element of the kind of Naval warfare anticipated for the Zumwalt. The ship’s cutting edge Tumblehome, wave-piercing hull can present a bit of a paradox; in one sense the next-generation hull brings improved maneuverability, speed and wave-cutting technology, it has led to questions as to just how stable the ship would be in the event of extremely rough seas.

(National Harbor, Md.) The US Navy’s stealthy new first-of-its-kind destroyer will incinerate targets with lasers, fire advanced weapons to destroy moving targets at sea, and use upgraded interceptor missiles to track and knock out approaching enemy fire -- all as part of a broader strategic shift to prepare the high-tech ship for massive, “blue-water” maritime warfare on the open seas.

“We are no longer what is called a land attack that operates in the littorals. We are now an offensive surface strike platform for blue water The Navy made a decision to go that way - for good reason,” Smith said, speaking at the Navy League’s Annual Sea Air Space Symposium.

The Zumwalt, he said, is specifically engineered with the space, weight, and power configurations able to accommodate a new generation of weapons. “The inherent capability of the ship, with respect to its signatures and capacity as far a space, weight, power and cooling...means there is huge margin here to do a lot of things in the future,” Smith said.

Navy program managers have told Warrior that the weapon incorporates an all-weather seeker, coupled with mid-course in-flight target updates. While weapons developers explain that many of the particular details of the new seeker technology are not available for discussion for security reasons, officials do say it is designed to integrate with and function alongside existing Tomahawk targeting and navigation technologies such as infrared guidance, radiofrequency targeting and GPS systems.