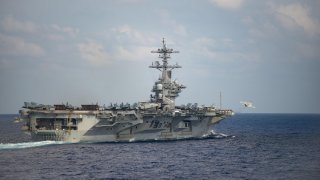 Here's What You Need To Remember: The Medium Aircraft Carrier would have just two steam catapults instead of the four that were on larger carriers, meaning it could launch planes at just half the rate of larger carriers. It would have just two elevators instead of three. Although it had fewer planes, it deleted fleet air defense and antisubmarine warfare aircraft from the mix to concentrate on striking power, giving nearly as much as a supercarrier.

Kyle Mizokami is a defense and national-security writer based in San Francisco who has appeared in the Diplomat, Foreign Policy, War is Boring and the Daily Beast. In 2009, he cofounded the defense and security blog Japan Security Watch. You can follow him on Twitter: @KyleMizokami. This article first appeared several years ago and is being republished due to reader interest.