Why No Other Ship Can Replace the Aircraft Carrier 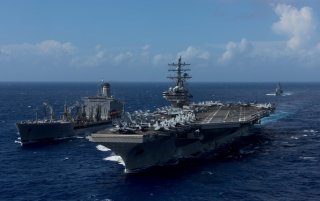 Here's What You Need to Know: The carrier air wing can generate more sustained combat power than any other conventional naval formation in existence.

Large-deck nuclear-powered aircraft carriers will be a key part of the Navy’s force structure for the next half-century, at a minimum. The primary reason for this is the remarkable adaptability and flexibility of the carrier air wing. When the current, evolving air wing is married to the functional improvements embodied in the new Ford-class nuclear-powered aircraft carrier (CVN), the result will be an advanced military capability of unparalleled flexibility, mobility, effectiveness, efficiency, and reach. The ability to tailor the carrier air wing to specific mission requirements, and even to add non-traditional aerial platforms into the mix means that the Navy will continue to project military power over great distances and across the spectrum of conflict for decades to come.

Since the advent of carrier-based aviation in the early 1930s, the United States has deployed twelve classes of purpose-built aircraft carriers, three of which (the Enterprise, Nimitz, and Ford) are nuclear powered. In that same period, some 200 different aircraft have flown from the decks of U.S. carriers. By continually modifying the mix of aircraft in its air wing, the Navy has been able to maintain the relevance and unique contributions of naval aviation to U.S. military power, despite continuously evolving threats.

The modern carrier air wing is possibly the most completely integrated military formation in existence. It has a balance of offensive and defensive assets, reconnaissance, early warning and command and control capabilities, aerial refueling, and electronic warfare. Training and deploying together, the air wing has the opportunity to learn how to work together as an integrated capability. Supporting the air wing and carrier operations, in general, are specialized platforms for anti-submarine warfare, combat search and rescue, and the delivery of personnel, equipment, and supplies.

The carrier air wing can generate more sustained combat power than any other conventional naval formation in existence. The enormous magazines available in a CVN can generate an amazing amount of firepower for a protracted period of time. It is important to remember that even the largest surface warships and submarines carry a relatively finite number of missiles. Once that weapon’s load is expended, ships must return to base to reload. While a CVN must eventually return to base to rearm and resupply, the time before this is required is relatively long.

A great deal of attention has been devoted of late to the U.S. Navy’s readiness to operate the carrier variant of the Joint Strike Fighter (JSF), the F-35C fighter jet. The Navy declared the F-35C’s Initial Operational Capability in early 2019. Both the Navy and Marine Corps fly the F-35C. The Marine Corps also operates the short takeoff/vertical landing F-35B, flying the aircraft from land bases as well as large-deck amphibious warfare ships.

The F-35C has the potential to revolutionize not only air operations but the way the entire Battle Fleet conducts combat. The JSF’s range, stealth, and advanced sensors will allow naval aviation to achieve air superiority even against numerically larger adversary air forces. These same characteristics plus an inherent electronic warfare (EW) capability and the ability to share data with other F-35s will allow a JSF-equipped force to engage even the most heavily defended targets, opening avenues for other strike aircraft to achieve their missions. Operating as a stealthy forward-positioned sensor, the JSF can support Navy long-range missiles as well as air and missile defenses. When the newest software upgrade, designated Block 4, is uploaded, the F-35s will be able to employ more weapons as well as improved EW capability.

The workhorse of the carrier air wing is the F/A-18E/F Super Hornet fighter jet. First deployed in 1995, the Super Hornet has undergone several upgrades that have enabled it to maintain its position as a top-of-the-line fighter and strike aircraft. The latest upgrade, the Block III Super Hornet, is just entering service. The Block III consists of five major improvements: an Advanced Cockpit System; conformal fuel tanks; a new mission computer; a tactical targeting data link; and a reduced radar cross-section. There are plans to add a long-range infrared search and track sensor to facilitate passive detection of hostile aircraft. These improvements will enable the Super Hornet to work alongside the F-35C and outmaneuver and outgun prospective adversaries.

Alone among the Services, the Navy operates a dedicated EW platform. The EA-18G Growler aircraft has replaced the venerable EA-6B Prowler. A derivative of the Super Hornet, the Growler is designed to provide escort jamming, intelligence collection, and suppression of enemy air defenses in support of other air assets. Not only does the Growler have all the improved performance attributes of the Super Hornet, but it also carries an advanced suite of electronic warfare systems capable of jamming a wide range of radars. The Growler’s legacy AN/ALQ-99 Jamming Pods will soon be replaced with the Next Generation Jammer, which can be continuously upgraded through software enhancements.

The carrier air wing also boasts some of the most sophisticated surveillance and command and control platforms, the E-2D Advanced Hawkeye. The Advanced Hawkeye’s new APY-9 radar is a two-generation leap forward in capability. It will provide high-quality surveillance and target track of multiple targets over both land and water. Of equal importance, the E-2D has a command, control, and communications suite that will allow it to support cooperative engagements involving a wide range of weapons systems, including those operated by other services.

Two other new platforms round out the transformation of the carrier air wing. The first is the CMV-22B Osprey, a variant of the platform the Marine Corps has successfully operated for years. The CMV-22B replaces the C-2 Greyhound in the role of inter-theater aerial logistics. The second is the MQ-25A Stingray, an unmanned aerial vehicle that will serve as a refueling platform for the rest of the air wing.

Critics of the modern aircraft carrier too often focus only on the alleged vulnerabilities of the ship and fail to address the role of the carrier air wing. Simply by increasing the range of carrier-borne aircraft and adding a refueling capability in the MQ-25A, the Navy has made the carrier more survivable and lethal. The ability to change the mix of aircraft flying from the carrier will keep this asset a vital military capability for decades to come.

This article first appeared in January 2021 and is being republished due to reader interest.