Why One General Says Russia Is America's No. 1 Threat 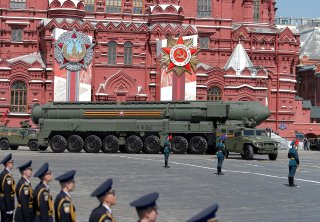 Here's What You Need to Know: Russia seems to be increasingly comfortable exercising bombastic rhetoric and is flexing its military might quite close to U.S. territory.

One Air Force general thinks that Russia, more than other countries, has both the means and the mentality to pose a credible threat to the United States.

In the opinion of one U.S. Air Force general, the primary threat to the United States today comes from Russia, thanks to advanced submarine and cruise missile design.

Russia’s cruise missiles are worth particular note in VanHerck’s eyes. He explained that Russia’s more modernized missiles are much more capable than Russia’s Soviet-inherited stockpile and can strike the United States from launch points within Russia itself.

Ultimately, Russia would like to combine an increasingly lethal missile and military hardware threat with sophisticated space and cyber capabilities to lend heft to the country's foreign policy ambitions. The Russian intent is, in essence, to “create deterrence for themselves, destroy our will and delay or degrade our ability to project forward.”

Moreover, Russia seems to be increasingly comfortable exercising bombastic rhetoric and is also flexing its military might quite close to U.S. territory. The previous year saw a hugely increased Russian presence in American airspace and waters. Northern Command “had more incursions into our air-defense identification zones since the end of the Cold War,” VanHerck explained.

In addition, a significant portion of Russia’s Pacific Fleet operated just off the coast of Alaska within the United States economic exclusion zone. One Russian submarine even had the audacity to come to the surface “in the middle of a bunch of fishing vessels up there [near the Alaskan coast] and actually fired a missile from there.” The aim of Russian muscle-flexing in northern American waters? Asserting dominance in the Arctic.

As global warming accelerates, Russia is uniquely positioned to gain from a warming environment. In addition to ocean shipping routes that stay ice-free for longer periods of time, Russia will also gain access to mineral resources in its far northern regions both on land and underwater. These resources could prove to be incredibly lucrative and are especially important to an oil-reliant, flagging economy that thus far has made little progress in weaning itself off of a mostly fossil-fuel-dependent economic model.

An economic and military influence on the Arctic is of high priority to the Russian state, a desire that is likely to grow rather than decrease over time. The United States should take note.