Why People With Eating Disorders Avoid Their Reflections 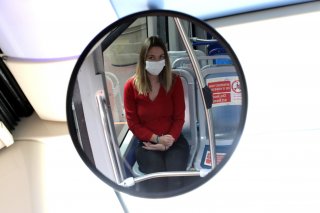 Eating disorders, such as anorexia and bulimia, are estimated to affect more than 16 million people worldwide. Considered to be serious mental health conditions, in many cases, food intake is either unrestrained, excessive, to the point of bingeing, or is progressively reduced to smaller and smaller quantities to enable a person to lose weight.

Research has also found that people affected by eating disorders struggle to accurately perceive their internal bodily signals. This means that body information such as feeling hungry or full, or whether your heart is beating quickly, that people usually sense and engage with unconsciously, is blunted and ignored.

Instead, there is a tendency to focus more on the appearance of their bodies. People with eating disorders will often look at their bodies to check for signs of weight gain.

One popular treatment approach for people with eating disorders tries to directly address body-image disturbances. Mirror exposure therapy involves patients wearing revealing clothes in front of a mirror. They are then asked to describe their bodies in a neutral and nonjudgmental fashion, the aim being that over time this will desensitise reaction.

Studies have shown this treatment can reduce distress, negative thoughts and body dissatisfaction. But our latest research suggests that how the therapy is carried out is vitally important. And that, in some cases, mirror exposure therapy in women with eating disorders might actually exacerbate some symptoms.

For our study, we wanted to find out more about how body perception is affected when people with eating disorder symptoms view their mirror image.

We recruited healthy women who assessed themselves as having major or low concerns about their appearance or weight. They were asked to report whether they could feel a very weak touch that occurred when a small device attached to their cheek made a vibration. They did this task while looking at an original or scrambled photograph of their own face, or a photograph of another woman’s face on a computer screen.

At the same time, we monitored physiological arousal by recording changes in electrical activity on the surface of the skin. This allowed us to check levels of stress and emotional responses to viewing the photographs.

We found that women with major concerns about their appearance or weight were better at detecting the touch when they were shown their own faces. But we also found their levels of distress were greater too. On the other hand, women with low concerns about their weight or appearance were better able to detect the touch while looking at the other woman or the scrambled images.

It seems then that looking in the mirror may lead people with eating disorders symptoms to be more distressed and to pay more attention to external features of the body and body appearance. This is not surprising because we know that people affected by an eating disorder tend to focus more on the appearance of their bodies, often ignoring their internal bodily sensations.

On the other hand, women with low concerns about their appearance may find it harder to detect the touch when viewing their own face. This is because this heightens their awareness of their internal body signals and this then clouds their ability to feel the vibration.

Otherstudies have used similar situations to look at how mirror exposure can alter body perceptions but have asked participants to detect signals coming from within their bodies, such as their heartbeat, rather than an external touch.

In these studies, mirror exposure was found to make people with eating disorder symptoms worse at detecting internal body signals. This suggests that the type of body signal (external vs internal) patients are asked to focus on during mirror therapy can make a big difference when treating body image disturbances.

Given that people with eating disorders focus more on their physical appearance – which is linked to their worries about their bodies rather than to other internal sensations, such as breathing or their heartbeat – careful considerations should be given to how mirror therapy is conducted.

This is important because such findings have the potential to open up new suggestions for future treatments of eating disorders and may also be key for evaluating current treatments.