Why the Royal Navy Wanted This Nazi Battleship Sunk 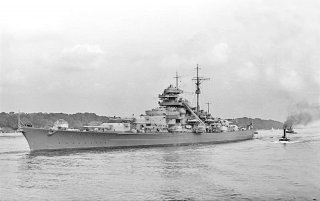 Here’s What You Need to Remember: The sinking of the Bismarck was an excellent example of combined arms at sea working together to sink a stronger opponent.

The German battleship Bismarck was the pride of the Kriegsmarine, Nazi Germany’s naval service. Construction began in 1936, and the ship was commissioned in April 1940. It and its sister ship, Tirpitz, were 821 feet long and displaced fifty thousand tons, making them by far the largest warships ever built by Germany. Despite its size, twelve Wagner steam boilers made it capable of a fast thirty knots.

Bismarck’s captain was correct. The Royal Navy was assembling a large force to sink it and had ordered every ship in the area to join in the search to find it. The much larger Royal Navy was able to assemble a force of six battleships and battlecruisers, two aircraft carriers, thirteen cruisers, and twenty-one destroyers to hunt Bismarck. Unfortunately, many of the larger ships were of World War I vintage, and could not catch up with the wounded, but still fast Bismarck.

Kyle Mizokami is a defense and national-security writer based in San Francisco who has appeared in the Diplomat, Foreign Policy, War is Boring and the Daily Beast. In 2009 he cofounded the defense and security blog Japan Security Watch. You can follow him on Twitter: @KyleMizokami. This piece was first featured in December 2016.