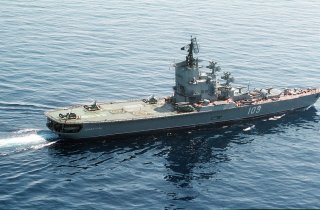 Here's What You Need to Know: The Soviet Union could never allocate enough of the country’s resources to build a real fleet of aircraft carriers. There was always some other perfectly reasonable—and eminently practical—way to spend the country’s rubles

In 1962, the USSR began construction of two aircraft carriers at the Nikolayev shipyards in the Ukraine. The two carriers, Moskva and Leningrad, were compromise ships, with the front half looking like a conventional guided-missile cruiser and the rear half consisting of a flight deck, a hangar and an elevator that transported aircraft between the two. The Moskva class was likely designed to hunt American and British Polaris missile submarines operating near Soviet waters.