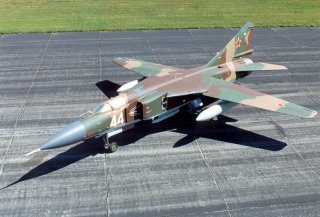 Here's What You Need to Remember: So impressively thorough and consistent is the MiG-23’s record of failure that it bears the dubious distinction of facing retirement earlier than the MiG-21 jet fighter it was meant to replace. The Soviet Air Force quickly moved on to the much more successful MiG-27.

Mark Episkopos is the national security reporter for the National Interest. This article first appeared earlier this year.