Why Russia Is Reinforcing Its Black Sea Fleet 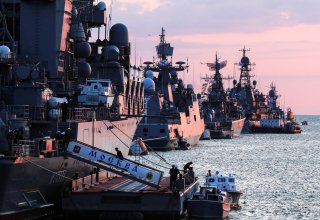 Here's What You Need to Know: Military tensions in the Black Sea have become routine following the 2014 Euromaidan revolution in Ukraine and Russia’s subsequent annexation of Crimea, bringing a cascade of aerial interceptions, high-profile military exercises, and increasingly risky naval altercations between Russian and NATO forces.

The Russian Navy is holding large-scale exercises in the Black Sea amid simmering military tensions with Ukraine.

These twenty surface vessels will perform joint operations with submarines, planes, helicopters, and minesweeping units that will likewise be present over the course of the drills. The precise makeup of the participating vessels and aircraft has not been revealed. The exercise will involve live-fire artillery and missile strikes against notional enemy targets, minesweeping operations, mock naval engagements, anti-submarine missions, and countermeasures against a hypothetical airborne assault.

This latest round of Russian exercises comes on the heels of mounting military tensions between Russia and Ukraine. Kiev will hold its own set of wide-ranging exercises, dubbed Joint Efforts 2021, from September 22–30. The Ukrainian exercises will be conducted on training grounds across the country, as well as the Black Sea and Sea of Azov. The drills are partly intended as a response to the massive Zapad 2021 exercises jointly organized by Russia and Belarus earlier this month, according to top Ukrainian military officials.

Military tensions in the Black Sea have become routine following the 2014 Euromaidan revolution in Ukraine and Russia’s subsequent annexation of Crimea, bringing a cascade of aerial interceptions, high-profile military exercises, and increasingly risky naval altercations between Russian and NATO forces. Earlier this year, Russia and Britain were almost drawn into an active maritime conflict when the Black Sea Fleet and U.S. Coast Guard reportedly fired warning shots and dropped bombs in the path of the British Type 45 destroyer HMS Defender to chase the warship out of Russia’s claimed territorial waters near the Crimean coast. The Fleet held a major live-fire exercise in the Black Sea in April, imposing what amounts to a transit ban on part of the surrounding area for the stated purpose of conducting the exercises safely. Those drills coincided with the U.S. Navy’s announcement that the U.S. Coast Guard cutter Hamilton entered the Black Sea “to support NATO allies and partners.”

Russia has steadily built up its Black Sea Fleet in recent years, adding three modernized guided-missile corvettes from the Admiral Grigorovich-class. The fleet possesses the hulking Moskva guided-missile cruiser, as well as a slew of Kilo and Project 636.3 Improved Kilo diesel-electric attack submarines. The Crimean Peninsula has been fortified with a formidable arsenal of echeloned air and missile defenses, contributing to a growing Russian anti-access, area-denial network in the Black Sea region. Crimea has likewise become an established part of Russia’s domestic defense industry, with the Zaliv Shipyard in Kerch floating out two missile corvettes—Tsiklon and Askold—since 2020, both belonging to the new Karakurt-class.