Why Russian Navy Ships Made a Pitstop in Greece 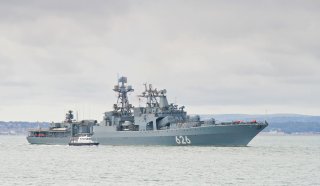 Here's What You Need to Remember: The Vice-Admiral Kulakov is currently operational in the ASW Brigade of the Northern Fleet’s Kola Flotilla of All-Arms Forces based in Severomorsk. She regularly participates in long-distance deployments to the Atlantic and Indian Oceans, the Mediterranean Sea and the Arctic.

This week the Russian Navy’s Northern Fleet’s large anti-submarine warship ship Vice-Admiral Kulakov and its support vessels arrived at the Greek port of Piraeus outside of the capital of Athens as part of a ceremonial visit and to replenish supplies. While that might normally mean ouzo or moussaka for the crew, this time around it will likely be a far more subdued port visit.

“Today the large anti-submarine warfare ship Vice-Admiral Kulakov, the medium sea tanker Akademik Pashin and the rescue tug Altai made a business call at the Greek port of Piraeus as part of their long-distance deployment missions,” the press office said in a statement according to Tass.

The Russian warships will reportedly stay at the Greek port for three days, and this marks the fourth country that the large anti-submarine warship ship has visited during its long-distance Mediterranean deployment. The Northern Fleet’s mini-armada had previously made calls at Algeria, Cyprus and Syria.

While such ports of call are often a highlight for many sailors, this time they won’t be able to take part in any sightseeing events or excursions. Out of precaution due to novel coronavirus pandemic, the sailors have been prescribed to comply with the sanitary regime, wear face masks and maintain social distancing while communicating with foreign colleagues.

In all of the countries that have been visited, the crews have had to comply with such restrictions to stem the spread of infectious diseases.

Named for the Soviet naval officer Nikolai Kulatov, the Udaloy-class anti-submarine warfare (ASW) destroyer Vice-Admiral Kulakov may not be as “ancient” as the ruins in Athens, but she is certainly old by some naval standards. The warship was launched in 1980 and commissioned in 1981. The ship was actually retired in March 1991 and underwent a refit that lasted more than eighteen years.

Since reentering service, the warship has taken part in anti-piracy operations in the Gulf of Aden, took part in the seventieth anniversary Battle of the Atlantic commemorations in May 2013, and last visited the Mediterranean to back Russia’s air campaign in Syria in 2016.

A helicopter deck over the stern also carries up to two Ka-27 ASW helicopters, which are equipped to search, track and destroyer submarines and surface warships beyond the visual range of the ship.

The Vice-Admiral Kulakov is currently operational in the ASW Brigade of the Northern Fleet’s Kola Flotilla of All-Arms Forces based in Severomorsk. She regularly participates in long-distance deployments to the Atlantic and Indian Oceans, the Mediterranean Sea and the Arctic.