Why the Saab Gripen is One of the World's Bestselling Fighters 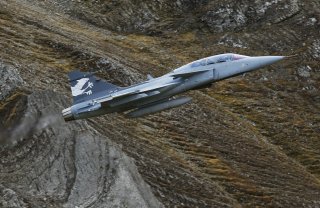 Here's What You Need to Remember: Jane’s has reported that the Gripen has the lowest operational cost of any modern fighter.

No Gripen has yet engaged in combat, either against air or ground targets. Instead, the Gripen has come to serve as the modern mainstay of a number of second-tier air forces, offering a low-cost but effective option for countries that do not expect to engage in serious conflict. Nevertheless, the Gripen’s impressive capabilities should serve the air forces well if they ever become entangled in a conflict. The low cost and ease of maintenance suggest that when the time comes, the Gripen will be ready to fight.

Dr. Robert Farley has taught security and diplomacy courses at the Patterson School since 2005. He received his BS from the University of Oregon in 1997, and his Ph.D. from the University of Washington in 2004. Dr. Farley is the author of Grounded: The Case for Abolishing the United States Air Force (University Press of Kentucky, 2014), the Battleship Book (Wildside, 2016), and Patents for Power: Intellectual Property Law and the Diffusion of Military Technology (University of Chicago, 2020). He has contributed extensively to a number of journals and magazines, including the National Interest, the Diplomat: APAC, World Politics Review, and the American Prospect. Dr. Farley is also a founder and senior editor of Lawyers, Guns and Money.