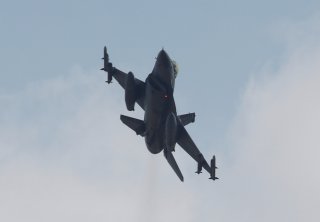 Here's What You Need To Remember: A nation that throws its fighter pilots in jail is not just wasting money, but also an extremely valuable resource. Yet in the name of politics, Turkey's government has purged its air force so badly that it can barely fly its F-16 fighters.

The Turkish government has been looking overseas to make up the shortfall. However, Washington has rebuffed a request to send over U.S. flight instructors, though Turkish pilots are receiving basic flight training in the United States. Turkey has also sought assistance from Pakistan—which also flies F-16s—though training Turkish pilots could violate U.S. arms export rules. In a sign of desperation, "the Turkish government has issued a decree that threatens 330 former pilots with the revocation of their civil pilot license, unless they return to Air Force duty for four years," notes an Atlantic Council report.

Michael Peck, a frequent contributor to TNI, is a defense and historical writer based in Oregon. His work has appeared in Foreign Policy, WarIsBoring and many other fine publications. He can be found on Twitter and Facebook. This piece was originally featured in 2018 and is being republished due to reader interest.