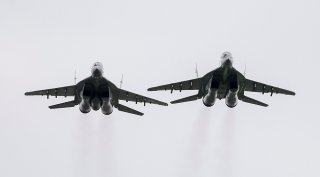 Here's What You Need to Remember: Washington bought 21 of the MiG-29s — including 14 C models, one B model and six A models — and flew them in pieces on C-17 transport planes to Dayton, Ohio.

The Fulcrum further lacked the avionics and information management systems to tell the pilot what was going on outside the airplane, or where they were. A pilot literally had to look at paper maps to figure out their location. In general, the MiG-29 is a fine airplane engineering-wise, but increasingly obsolete for aerial warfare in the 21st century without upgrades.