Why the U.S. Army Believes Artillery Still Rules the Battlefield 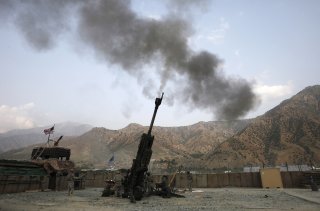 Here's What You Need to Know: Winning the next firefight in a high-intensity conflict will require indirect-fire systems with additional range, greater precision, and enhanced maneuverability.

Artillery is reclaiming its place as the King of Battle. Recent conflicts in Ukraine and the Caucasus have demonstrated that long-range precision-fire systems, both artillery and rockets, are especially deadly against fixed positions and stationary or massed field formations, particularly when operating with drones to provide accurate targeting. When it comes to indirect-fire systems, the U.S. military is outnumbered and outranged by its great-power competitors, most notably Russia.

In response, the U.S. Army has made the acquisition of new indirect-fire systems its highest modernization priority. As part of this effort, the Army is exploring the value of procuring a mobile, truck-mounted 155-millimeter howitzer to replace existing towed 155-millimeter artillery in the Stryker Brigade Combat Teams (SBCTs). Fortunately, there are several potential contenders for this mission, most of them foreign.

Winning the next firefight in a high-intensity conflict will require indirect-fire systems with additional range, greater precision, and enhanced maneuverability. This is the driving rationale behind the U.S. Army’s number one modernization priority: Long-Range Precision Fires (LRPF). The goal of this effort is to restore overmatch in indirect fire, providing new capabilities that can outrange, outshoot, and outmaneuver those of prospective adversaries.

In this new environment, locating and engaging an adversary’s mobile long-range fire systems while protecting one’s own will be a priority. As explained in a recent public presentation by the U.S. Army’s Chief of Staff, Gen. James McConville, much of the Army’s modernization investments are directed at developing the sensors, networks, and fire systems to engage such targets in a matter of seconds, rather than the ten or more minutes it takes today.

Responding to this new reality, the Army is investing in upgrading and modernizing its artillery systems. It has a well-established program to upgrade the existing Paladin self-propelled 155-millimeter howitzers so they can better operate with the armored brigade combat teams of which they are a part. Under the LRPF program, the Army is developing a longer-range variant of the Paladin, called the Extended Range Cannon Artillery, that is expected to be able to hit targets at ranges of at least seventy and possibly one hundred kilometers.

There is a problem when it comes to non-armored units, most significantly the SBCTs. The SBCTs are mechanized units primarily built around variants of the Stryker wheeled combat vehicle. These units have proven themselves to be extremely agile and effective in operations in multiple theaters.

But for the high-end fight, the Army is planning to enhance the lethality and survivability of the SBCTs. One element of such a program is to replace the SBCT’s 155-millimeter towed artillery with a system that has better range, rate of fire, survivability, and maneuverability.

The Army did not have the time or resources to undertake a new start program. Instead, it went on a global search for existing designs that were production-ready. The U.S. Army conducted a 2021 “shoot-off” of candidates for a truck-mounted 155-millimeter howitzer acquisition to equip its SBCTs. Of the companies that indicated an interest in this program, only one is entirely U.S.-owned and operated.

Apart from the United States, the leading candidates are those from the UK, Israel, France, and Serbia. Each offers enhanced range, rate of fire, survivability, mobility, and reduced manpower/maintenance compared to the existing towed 155-millimeter system.

One entrant is BAE Systems Bofors’ Archer-FH77BW L52 self-propelled howitzer, mounted on an armored 6x6 chassis. With its advanced fire control system and automatic loader, Archer can set up, fire half a dozen rounds and move within two minutes. This also means it can operate with a smaller crew—as few as two—than the current towed 155-millimeter system. And with a top speed of 70 kilometers/hour, it can keep up with the other SBCT vehicles. Archer is currently operated by both the Swedish and Norwegian armies.

Another competitor is the ATMOS Iron Sabre system, offered by Elbit Systems of America, a subsidiary of Israeli-based Elbit Systems. The proposed version, with a range of more than 40 kilometers, could be mounted on either a 6x6 or 8x8 truck and will be equipped with advanced targeting technology and a mechanical/automatic loader that will allow it to operate with a crew of just four. The system can set up and fire its first round within thirty seconds and a salvo of up to six projectiles and move again within two minutes. ATMOS is in use with the Israel Defense Forces, and 50 percent of the Israeli version of the system is built in the United States.

French company Nexter is also bringing its Caesar system to the shootout. Caesar, operated by the French army, is reported to be able to fire six shots in under two minutes. The system’s 8x8 version can carry thirty rounds while the 6x6 variant can carry eighteen. According to Nexter, Caesar has an adapted automatic loading system and can be operated with a small crew.

The U.S. entrant has been dubbed Brutus by its designer, AM General. The platform uses a unique soft recoil system that allows for rapid setup, shooting, and movement while minimizing maintenance and manpower requirements. Because it uses existing howitzers, prime movers and other components, Brutus should have a short time to field.

Finally, there is the NORA B-52 M21 155-millimeter howitzer, a Serbian-manufactured system being offered in the United States by Global Ordinance. The system can carry thirty-six rounds, twelve of which are stored in the automatic loader. It also has an automatic navigation system and advanced fire controls.

Increasingly, the Department of Defense is finding itself looking abroad for capabilities that the U.S. military desperately needs but are not always available from the domestic aerospace and defense industry. It is fortunate that the Pentagon has access to a broad-based and robust international defense industrial base. This is a major strategic advantage in an era of global competition. Whichever company wins the shootout, though, the work will be done in the United States.