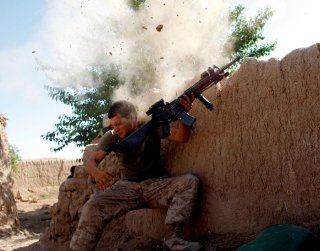 Here's What You Need to Remember:  The RFI requests commercial, readily-available designs with 16- or 20-inch barrels, the ability to fix muzzle devices capable of flash- and sound-suppression, fully-ambidextrous controls, a rail system, optics-mounts and an adjustable buttstock.

On May 30, 2017, the U.S. Army officially asked industry for information on a new 7.62-by-51-millimeter rifle. The request signals the Army’s intention to begin moving away from the 5.56-by-45-millimeter M-16 and M-4 that have been the ground-combat branch’s main firearms for generations.

The Army’s RFI comes hot on the heels of the U.S. Marine Corps’ own RFI for a new off-the-shelf infantry rifle.

But the Army’s so-called “Interim Combat Service Rifle” could be a stopgap — a weapon the service buys quickly while it considers longer-term solutions to its firearms needs. In the short term, the ICSR could complement the 7.62-millimeter M-14, itself a stopgap.

The RFI “should not be construed as a request for proposal or as an obligation on the part of the government to acquire any services or hardware,” the Army stated. The service just wants to know what 7.62-millimeter rifle designs are available. The Army hasn’t set aside any funding for buying or testing a new weapon. Yet.

So what is the Army looking for? The RFI requests commercial, readily-available designs with 16- or 20-inch barrels, the ability to fix muzzle devices capable of flash- and sound-suppression, fully-ambidextrous controls, a rail system, optics-mounts and an adjustable buttstock.

The RFI also requests back-up iron sights, an overall weight of less than 12 pounds and a minimum magazine capacity of 20 rounds.

Another problem is modern ceramic body armor, which the current 5.56-millimeter round might struggle to penetrate. But The Firearms Blog speculated that the problem lies with the composition of the current round, not its size.

“For a 7.62-millimeter rifle to be effective, it must fire not the current M80A1 round, but a tungsten-cored [armor-piercing] round such as the M993 or the upcoming XM1158 ADVAP, which almost certainly also has a tungsten core,” the blog noted.