Why the U.S. Government Seized Citizens' Gold in the 1930s 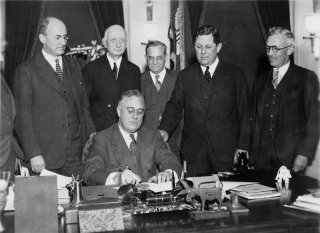 With global financial markets in disarray, many investors are turning to classic safe havens. Gold is trading above US$1,750 (£1,429) per troy ounce, which is the standard measure – more than 15% above where it started 2020. Even after a strong rally since March, the S&P 500 is down nearly 10% over the same period.

Gold confers familiarity during downturns. Its returns are uncorrelated with assets like stocks, so it tends to hold its value when they fall. It is also a good way of avoiding currency devaluation. It therefore features in any well diversified investor’s portfolio, whether via gold-mining shares, gold funds, bullion or whatever.

Yet there are two slight caveats to viewing gold as a safe haven. Early in an economic downturn, gold prices often plummet with the rest of the market. This is from investors selling gold to offset losses in shares and other assets. We saw this in March, when gold fell 12% in two weeks, then quickly recovered. If the coronavirus causes more market panic, this could happen again.

During extreme crises, governments can also seize people’s gold. There have been some stunning examples of “gold confiscation” in the past. Most memorably, this occurred in the US in 1933 during the great depression – albeit it’s more accurate to call it a nationalisation than a confiscation, since citizens were compensated. The government of Franklin D Roosevelt seized all gold bullion and coins via Executive Order 6102, forcing citizens to sell at well below market rates. Immediately after the “confiscation”, the government set a new official rate for gold that was much higher as part of the Gold Reserve Act 1934.

This was the era of the gold standard, which meant dollars were tradeable for an exact amount of the precious metal. Seizing the metal enabled the government to print more dollars to try to stimulate the economy, and also to buy more dollars on the international markets to shore up the exchange rate.

Many gold owners were understandably unhappy about the gold seizure, and some fought it in the courts. Ultimately, however, the government could not be stopped, and gold ownership remained illegal in the US until the 1970s.

This intervention was not unique, even in contemporary history. In 1959, Australia’s government put a law in place that allowed gold seizures from private citizens if “expedient to do so, for the protection of the currency or of the public credit of the Commonwealth [of Australia]”. And in 1966, to stop the decline in the pound, the UK government banned citizens from owning more than four gold or silver coins and blocked the private import of gold. This was only lifted in 1979.

Horns of a trilemma

Why do governments risk the bad publicity of restricting gold? This is linked to a cornerstone of macroeconomics known as the monetary policy trilemma. This states that countries must choose between two of the following and can’t generally do all three at the same time: (1) setting fixed exchange rates; (2) allowing capital to move freely over international borders; and (3) being able to independently set interest rates and print money (in other words, control monetary policy).

In the 1930s system, countries generally chose fixed exchange rates linked to gold, plus free capital movement and sacrificed control of monetary policy. The system came under more and more pressure because too many investors were trading in their money for gold. One way for the US to take enough control of monetary policy to print more money was to impose various capital controls, including seizing gold.

Today, the situation is different because western economies have free-floating exchange rates so they have control over monetary policy and can allow capital to move freely. This means that during a crisis, they can print money and cut interest rates without having to impose controls on the likes of gold.

In fact, any direct meddling by governments in the gold markets today would likely be counterproductive. It would increase investor anxiety and encourage them to rush to other assets with similar properties such as silver or other precious metals. Those who hold gold are therefore probably safer than they might have been in the past.

There are alternatives open to governments besides outright gold nationalisation. For example, when the UK left the international gold standard in 1931, the devaluation of the pound put pressure on other currencies such as the Dutch guilder. In response, the Netherlands imposed a variety of restrictions on gold that stopped short of confiscation.

Again, this kind of move is unnecessary in today’s era when countries control their own monetary policy. Gold will probably remain a safe haven on the sidelines – unless countries felt they had to sell their reserves aggressively for some reason, say to reduce debts. Even in the current crisis, that’s not on the horizon. But the one lesson from history that all investors need to bear in mind is that in times of crisis, anything goes.