Why the U.S. Military No Longer Fights with Flamethrowers 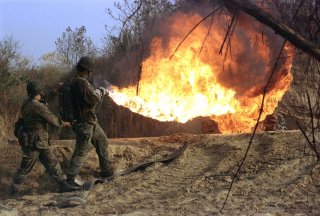 Here's What You Need to Remember: The Department of Defense effectively retired flamethrowers from combat use in 1978, but flame as a weapon has been used throughout history.

Why it fell out of use is unknown, but by the 13th century, Greek Fire disappeared from the battlefield.

In Vietnam, various flamethrowers were also seen as a valuable close combat weapon—one that could demoralize enemy troops and reduce positions that have otherwise resisted other forms of attack. However, images of the “Napalm Girl”—the 1972 Pulitzer Prize-winning photo of a naked nine-year-old girl fleeing her village following a napalm attack—helped turn public opinion against the use of such weapons.