Why the U.S. Navy Detonates Bombs Near New Aircraft Carriers 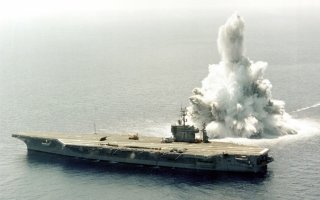 Here's What You Need to Know: Detonating bombs near new carriers helps approximate the kinds of serious threats the ship might face in combat.

“During World War II, it was discovered that although such 'near miss' explosions do not cause serious hull or superstructure damage, the shock and vibrations associated with the blast nonetheless incapacitate the ship, by knocking out critical components and systems,” the MITRE assessment, called “Navy Ship Underwater Shock Prediction and Testing Capability Study” states.