Why the U.S. Navy Once Nuked 95 Warships 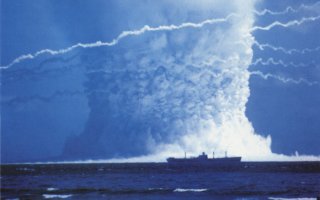 Here's What You Need to Know: The Navy wanted to know if nuclear weapons rendered modern navies obsolete.

What would happen if you dropped a nuke on a fleet of ninety-five warships? The U.S. government—and hundreds of Marshall Islanders—paid a big price to find out.

In the immediate aftermath of World War II, the U.S. military—which used two atomic bombs against Japan in 1945—found that they had barely scraped the surface of nuclear weapons technology. Washington decided that more tests were needed and that the remote atoll of Bikini, one of the northernmost parts of the Marshall Islands, was the best venue.

The primary goal was to gauge the effects of nuclear weapons on naval assets, with some post-war airpower theorists arguing that surface ships were increasingly obsolete in the context of modern warfare. But there was a secondary purpose: the government sought to further study the effects of nuclear explosions on living beings. NInety-five ships, loaded with a total of at least fifty animals, were amassed for the experiment. There is yet another underlying consideration: these detonations—the first nuclear test since the end of the war—were to serve as a live demonstration of the U.S. nuclear deterrent.

Bikini’s 167 residents relocated to nearby Rongerik atoll, and two initial detonations were scheduled for the summer of 1946 as part of “Operation Crossroads”—one above-surface explosion and another underwater detonation, for the purpose of comparing the efficacy and destructive effects of these two delivery methods.

The initial detonation was greeted by the Navy as a cause for celebration: the bomb missed badly, sinking only five ships. The Navy was elated: “The scene of comparative serenity seemed to delight some of the Navy officers, jubilant in the belief that the test had not demonstrated that modern navies are obsolete in this atomic era,” reported The Washington Post. As many as one-third of the test animals reportedly died from the explosion. The second, underwater explosion didn’t fare much better, sinking few of the ships; instead, it generated a radioactive shower that contaminated the remaining fleet. After some failed attempts to decontaminate the ships, the test’s final stage was canceled pending an investigation into what went wrong. It appears that the military slightly overestimated the physical damage from the blast, but drastically underestimated the extent and severity of radioactive contamination.

What followed was a slew of additional nuclear tests over the course of the 1950s, with the Marshall Islanders forced to relocate several times. The year 1954 saw the biggest test yet, with the transition from fission to fusion technology. The blast was more than twice as powerful as projected, generating substantially more radioactive fallout and prompting still further evacuations among contaminated islanders—thyroid disorders and leukemia became particularly common consequences of radioactive contamination.

As detailed by Radiation Medicine and Biochemistry Professor Timothy Jorgensen, the harrowing experiences of the Marshall Islanders generated rafts of crucial data into the long-term effects of radioactive exposure. Some Islanders were compensated and treated, but numerous others were left without support after funding for the Nuclear Claims Tribunal dried up in 2009.