Why the U.S. Navy Sent this World War II Battleship to Vietnam 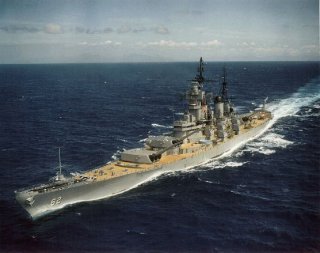 Here's What You Need to Remember: USS New Jersey was on the gun line in South Vietnam for 120 days. She participated in the U.S. Navy’s Operation Sea Dragon, an effort to disrupt North Vietnam’s seagoing supply effort, shell coastal batteries, and radar sites. As originally intended, New Jersey was able to relieve U.S. tactical air forces from missions near the enemy coastline.

The Iowa-class battleships were originally designed to duke it out with other battleships, including such Axis ships as the German Bismarck and the Japanese super-battleships Yamato and Musashi. The changing nature of warfare, however, relegated the battleships to providing naval gunfire support for Army and Marine landings across the Pacific and anti-air warfare escort for aircraft carriers. All four briefly saw action in the Korean War, with Iowa, New Jersey, and Wisconsin all reactivated to provide heavy gunfire support from the sea. The Korean War ended in 1953 and New Jersey was again decommissioned in 1957.

In 1968 New Jersey was brought out of mothballs yet again, for yet another war. New Jersey was recommissioned on April 6, 1968 at the Philadelphia Naval Shipyard where she had been built a quarter-century before. The battleship had only a modest set of modifications: her 40-millimeter guns were removed and a helicopter landing pad was added. The ship was also fitted with SHORTSTOP, a brand new combined jammer and chaff launcher meant to protect the ship from radar-guided anti-ship missiles.

USS New Jersey departed Philadelphia on May 16, 1968, traveling down the East Coast and passing through the Panama Canal before arriving at her new homeport of Long Beach. The ship fired her guns, including the sixteen-inch guns off San Clemente Island in June 1968, then proceeded to Hawaii and then Subic Bay, the Philippines.

The battleship finally arrived off the coast of Southeast Asia on September 29th, 1968, and fired her guns in anger again for the first time in over fifteen years the next day. New Jersey was on the gun line in South Vietnam for 120 days. She participated in the U.S. Navy’s Operation Sea Dragon, an effort to disrupt North Vietnam’s seagoing supply effort, shell coastal batteries, and radar sites. As originally intended, New Jersey was able to relieve U.S. tactical air forces from missions near the enemy coastline. The battleship also responded to calls for fire from the 1st and 3d Marine Divisions, 173rd Airborne Brigade, and 101st Airborne Division.

After her Vietnam tour the ship returned to Long Beach. During the workup to her second tour her crew learned that the ship was scheduled to once again go into mothballs, the victim of cost-cutting. Even a draftee military found it difficult to financially support a ship with 1,600 crew members and the demands of both Vietnam and the Cold War to satisfy.