Why We Should Not Treat all Conspiracy Theories the Same 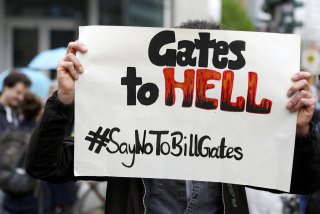 Ever since the coronavirus spread across the world, suspicions have proliferated about what is really going on. Questions arose about the origins of the virus, the way it makes people sick, the mitigation measures taken, the suspended civil rights, the connection with 5G, possible cures and medications, and about the role of Bill Gates in it all.

These ideas are commonly framed as conspiracy theories. Yes, they may all distrust the mainstream narrative and share certain characteristics, but they are not one of a kind.

They take so many different forms and have such varying degrees of plausibility that I question how useful it is to bracket them all under the same banner. To understand and effectively respond to the various coronavirus conspiracy theories, we need to dig deeper.

The dominant explanation for the popularity of coronavirus conspiracy theories is remarkably similar: these dark and unsettling ideas help people make sense of a complex and uncertain world. They provide sufficiently large explanations for tragic events, and give back feelings of agency and control.

Since these ideas sometimes have real-world consequences, from 5G masts set on fire to ignoring coronavirus mitigation measures, various commentators condemn these conspiracy theories. Officials now need not only fight a health pandemic, so their story goes, but an infodemic too.

A closer look at these theories or – even better – actual engagement with the people propagating them, shows conspiracy theories not so much as a uniform coping strategy in unsettling times, but rather as a wide array of cultural expressions.

These include suspicions of planned efforts to impose mass vaccinations, doubts about the origins of the virus, expressions of disgust for the ruling elite, geopolitical insinuations, pointers to an inflated media panic, the scapegoating of certain societal groups (Chinese or Jews), critiques on the methods and measurements of COVID-19 symptoms and deaths, discontents with powerful philanthropists, worries about the expansion of authoritarian government policies, or concerns about corporate intrusion in the search for effective medications.

This means, as I argue in my recent book, that we need to focus on the meaning, diversity and context of different conspiracy theories, as well as the people who subscribe to them.

Starting with the anti-vaccination movement – of great concern to many. Because many anti-vaxxers in the western world are highly educated urban hipsters, it is difficult to reject them as ignorant deplorables.

Next to critiques of Big Pharma, vaccine hesitancy is informed by holistic and naturalistic ideas about health and the body; ideas rooted in alternative medicine and New Age spiritualities. In these subcultural worlds, emotions, feelings, experiences, testimonies and social relations are often more important guides than scientific knowledge.

Rather different are those active in the 9/11 Truth Movement. Broadly interested in geopolitics and government cover ups, these people challenge the mainstream narrative of 9/11 with competing factual and scientific evidence. They advance visual proofs and mathematical calculations of why the towers could not have collapsed by the planes, but indicate controlled demolition instead.

These activists profess knowledge of physics, construction and explosives, and ground their legitimacy in this expertise. They are focused on “exposing the official lies”. Like true activists, they wish revolutionary change, “to end the regime and illicit power structures responsible for 9/11”.

The list of markedly different conspiracy subcultures could go on. Think of the Flat Earthers, who deploy various scientific methodologies and perform actual experiments in the outside world to show that it is not a globe but a Truman Show-like dome.

Favouring rational thinking and scientific methods is, however, no guarantee for brotherhood. 9/11 Truthers generally stay away from them as that would harm their credibility.

QAnon followers, meanwhile, deploy various strategies to interpret secret messages from their anonymous leader Q. These are known as “crumbs” or “drops” and are all part of their search for truth and redemption. Sharing many characteristics of millenarian New Religious Movements, QAnon followers anticipate a violent apocalypse when the conspiracy will be dismantled and followers will be vindicated.

This brief overview already shows the wide variety of themes, ideologies, plausibilities, origins, people and potential dangers of different conspiracy theory subcultures. Regarding conspiracy theories as one uniform category obscures all these differences and the various societal dynamics in which conspiracy theories play a role.

This inevitably leads to simplistic explanations. Further, it has the political effect of collectively stigmatising certain ideas and people – and prematurely excluding them from legitimate political debate. Conspiracy theories are not uniform – nor should our engagements with them be.