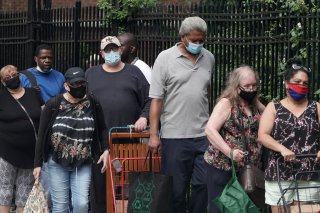 The pandemic is driving American families to the edge, with tens of millions at risk of losing their homes and over 1 in 10 U.S. adults reporting their households didn’t have enough to eat in the previous week.

While Congress debates extending unemployment benefits that expired on July 31 and other additional aid, there’s an important program that already exists that could help struggling Americans get through the crisis however long it lasts. Known as the earned income tax credit, or EITC, it provides aid primarily to the working poor. In a typical year, it lifts more than 8.5 million people out of poverty, while improving the health and well-being of parents and children.

Since the credit depends on earned income, many families may be at risk of losing all or some of the benefit because so many were laid off as economies in many states shut down. Even as restaurants and other businesses reopen, it’s likely that many of those who lost their jobs will remain unemployed or underemployed for many months or longer.

Our own research shows changes to the structure of the U.S. economy, with the sharp growth of low-wage and unstable jobs, is weakening the EITC’s effectiveness at fighting poverty.

Some lawmakers are trying to reform the EITC as part of the next coronavirus bailout to ensure it helps more Americans and make it more like a basic income guarantee. We believe doing so would not only ensure low-income Americans continue to have access to this vital tax credit during the pandemic, additional changes could also strengthen the program for years to come.

The earned income tax credit, which supplements earnings for many low- and moderate-income workers, has helped buffer economic hardship for single parents and other recipients since it was created in 1975.

Eligible taxpayers receive the credit after they file their taxes. And unlike a deduction, even those who didn’t pay any income tax can receive the credit, which they’ll get as part of their refund. Twenty-eight states and the District of Columbia also offer their own EITCs, typically based on the federal credit.

In 2019, taxpayers received about US$63 billion in credits through the federal EITC, making it the government’s largest cash safety net program for working families with children. Recipients qualify for the credit based on how much money they earn and depending on their marital status and number of children. The benefit rises with each dollar earned until reaching a peak and then phasing out.

Put another way, a family with one child receives an average credit of 34 cents for every dollar of earned income, which rises to 40 cents for two and 45 cents for three or more children.

The tax credit has been tremendously successful. In 2018, the latest data available, the EITC lifted about 10.6 million people out of poverty and reduced its severity for another 17.5 million. And since its inception, it has reduced child poverty by 25%.

It also enjoys strong bipartisan support because of its focus on encouraging and supporting working.

But the EITC only helps individuals able to find work, which becomes a bigger challenge in a pandemic or severe recession.

Our unpublished calculations from a national representative survey showed that about a fifth of the 25 million EITC beneficiaries in 2019 lost their jobs from March to April and over 16% remained unemployed in June, the latest data we have available. That means over 4 million working families could lose a large portion of their benefits in 2021, depending on a variety of factors.

While these problems are most obvious in a recession, they’ve worsened over the past four decades as the labor market has changed.

The share of workers doing low-skill, low-wage work has jumped from 42% in 1980 to about 54% in 2016. And an increasing number of these jobs are in the precarious gig economy that doesn’t provide stable incomes. That means workers are less likely to see a steady aid from the EITC because the maximum benefits are gained when working full time at minimum wage.

The EITC’s also provides very little support to those without children. A nonpartisan think tank estimates that about 5.8 million adult workers without any children as dependents are taxed into poverty – or impoverished further – each year because their EITC is too small to offset their federal income and payroll taxes.

House Democrats are pushing to reform the EITC in the next coronavirus relief bill. Specifically, they’d like to tweak the credit’s phase-in so that workers receive more benefits for fewer hours worked, allowing those who lost their jobs and remained unemployed for the remainder of 2020 to maintain benefits similar to last year. They also would lower the minimum age for receiving the credit to 18 from 25 for certain vulnerable groups like those experiencing homeless.

We’d suggest also increasing the benefit for tax filers without children and lowering the minimum age for everyone so that the millions of young people graduating from high school and college into an economic recession can get additional support.

These reforms would not only help now but could also deepen the impact of the EITC by creating an income floor for more people as the economy changes, essentially creating something very much like a basic income guarantee. A key difference, however, is that most universal basic income proposals don’t require recipients to work.

While we cannot fully predict how interactions between job losses and the tax and benefit system will play out, this moment presents an opportunity to test reforms that would benefit low-income working families for years and decades to come.